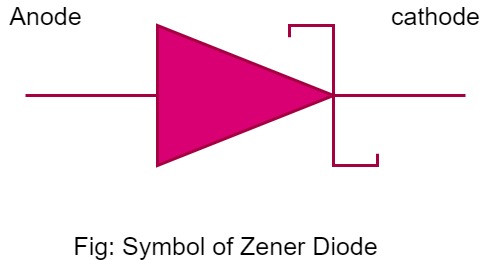 The symbol of Zener diode is same as an ordinary diode except that the bar is turned into Z-shape.

Voltage Vz: Reverse breakdown voltage 2.4 V to about 200 V; maximum up to 1 kV
Current Iz (max.): Maximum current at the rated Zener voltage Vz—200 uA to 200 A.
Current Iz (min.): Minimum current required for the diode to break down—5 mA and 10 mA.
Power rating: The maximum power the Zener diode can dissipate is the product of voltage across the diode and the current flowing through.
Typical values are 400 mW, 500 mW, 1 W, and 5 W; for surface mounted, 200 mW, 350 mW, 500 mW, and 1 W are typical.
Voltage tolerance: Typically ±5%.
Temperature stability: Diodes around 5 V is stable.
Zener resistance (Rz): The diode exhibits some resistance as evident from the IV characteristics.

when Zener diode is operated in reverse biased mode there will always be same thermally produced electrons and holes .As the reverse voltage is increases ,the free electrons move with higher speed. Higher the reverse bias voltage greater is the speed of electrons, thus electrons collide with the atom of semiconductor ejecting valence electrons and this phenomenon continues until high current flows in the diode and the process is called breakdown.

Normally there are three breakdown in Zener diode:

In ordinary diode, when reverse biasing voltage is increased to a breakdown value, a heavy current flows through device. This will cause overheating of device that permanently destroys it and the process is irreversible process.

In a heavily doped PN junction diode, Zener effect occurs due to spontaneous generation of hole-electrons pairs within the junction region by the effect of intense electric filed across it. The ionization is occurred due to the higher electric filed, causing the bonds to break and flow of high current. This effect is negative temperature coefficient(NTC) i.e. increase in temperature causes reduction in flow of current due to more ionization and less mobility of ions which occurs at low voltage. It is reversible process.

In a lightly doped PN junction diode, the high speed electrons due to large reverse bias voltage collide with valence electrons of the atoms fixed in the crystal lattice of depletion region. As a result some electrons are liberated out of the covalent bond, creating further hole electron pairs. The ionization occurs due to collisions of high speed electrons with valence electrons of depletion region, it is positive temperature coefficient(PTC) i.e. increase in temperature causes increases in flow of current occurs at high voltage. It is also reversible process. 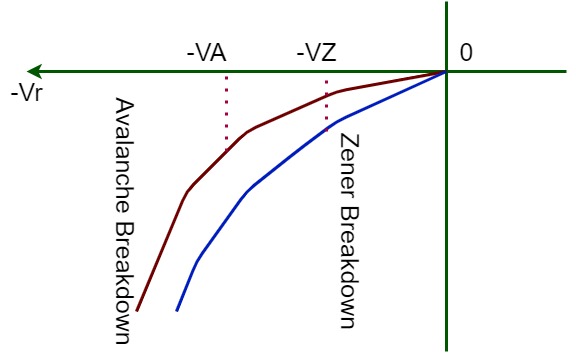 A Zener diode uses reverse(VR/IR) characteristics for its operation. Therefore it is always reverse connected in the circuit i.e. it is always reverse biased. As we increase reverse voltage from 0V,there is a very small reverse current IR (a few μA) which essentially remains constant until breakdown voltage is reached. Once the breakdown voltage (=VZ, Zener voltage) is reached ,the Zener diode conducts current heavily. 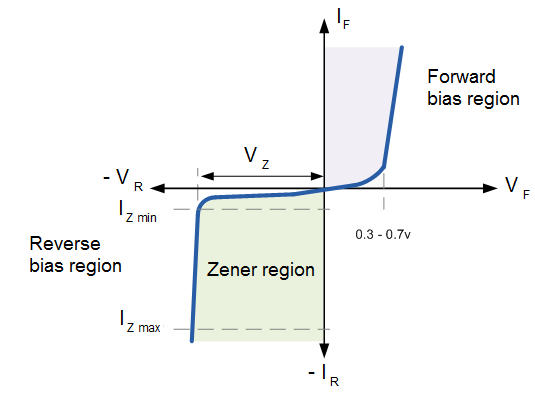 When the circuit is properly designed, the load voltage E0 remains essentially constant (equal to vz) even though the input voltage Ei and load resistance RL may vary over a wide range. 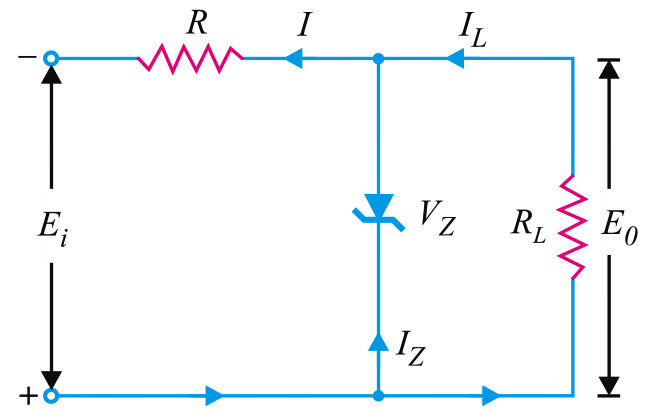 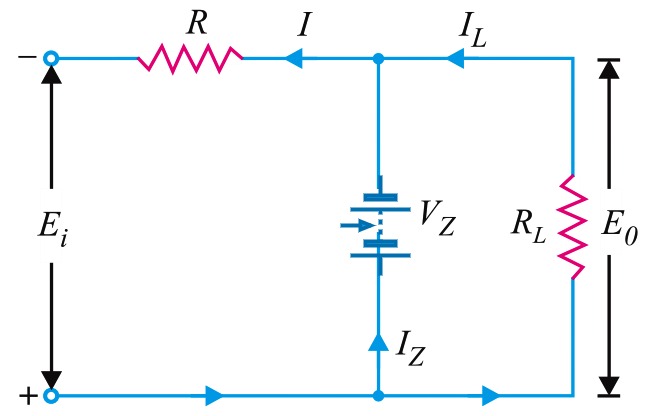