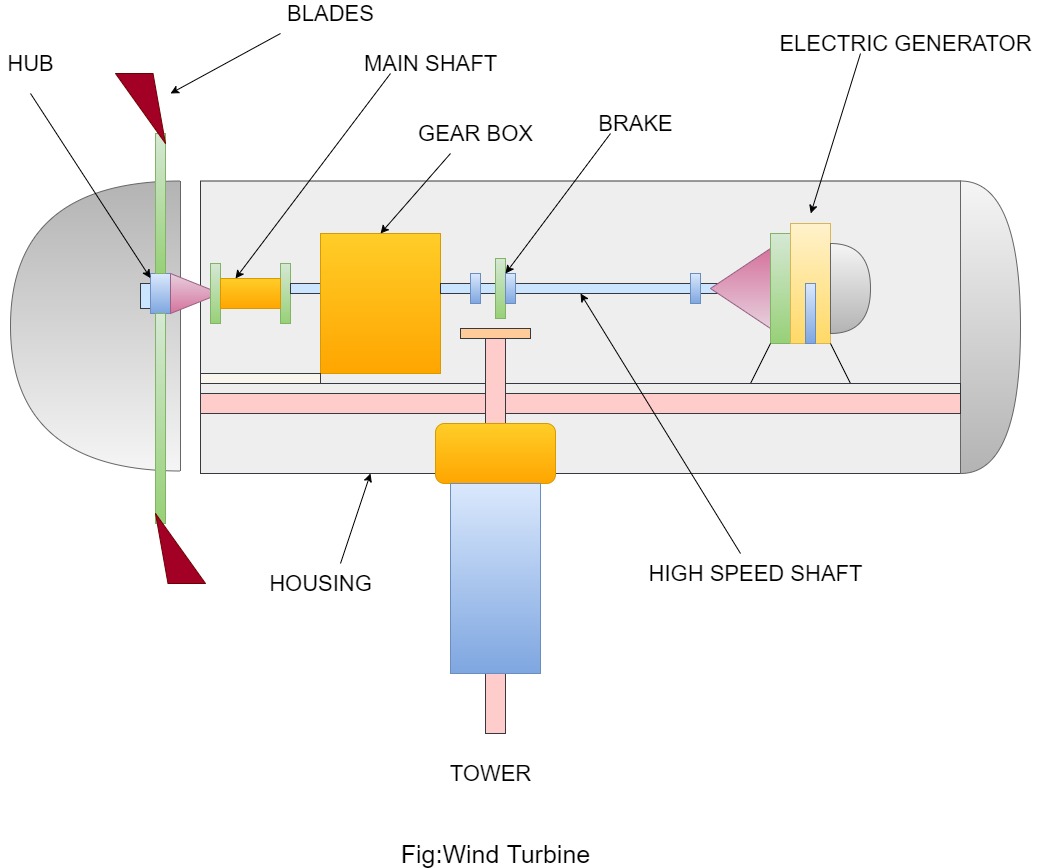 Wind is mainly caused due to the solar heating of the atmosphere. Wind as a source of energy is very attractive because it is plentiful, inexhaustible, renewable , and non-pollutant. Wind blows for 320 days in a year and gives an advantage over sunlight. Worldwide five nations Germany, USA, Denmark, Spain and India has installed wind energy capacity. About 79,300MW of energy is the total worldwide wind power installed capacity.

A wind turbine is a rotary device that extracts energy form the wind and converts into rotary mechanical energy. Blowing wind spins the blades on a wind turbine. When a wind blows ,a pocket of low pressure air forms on the downwind side of the blade. The low pressure air pockets pulls the blade toward it, which cause the rotor to rotate called lift. The force of the lift is much stronger than the winds force against the font side of the blade, called drag. The combination of lift and drag causes the rotor to spin like a propeller. The rotor of the turbine are attached to a hub that is mounted on a rotating shaft. The shaft goes through a gear transmission box where the rotating speed is increased. The transmission is attached to a high speed shaft which turns a generator that produces electric power .The electric power may be dc or ac .Direct current can be generated by driving brushless dc generator attached to the windmills rotor. wind turbines can be used as stand-alone applications, or they can be connected to a utility power grid or combined with photovoltaic system.

wind turbine are designed to exploit the wind energy that exists at a location .Aerodynamic modeling is employed for determination of optimum tower height, control systems, number of blades and blade shape.

Basically the wind turbines are of two types

Horizontal-Axis wind turbine(HAWTs) have the main rotor shaft and electrical generator at the top of the tower and must be pointed into the wind.

The rotor component includes the blades for converting wind energy to low speed rotational energy and costs about 20% of the total cost of the turbine.

The generator component includes the electrical generator, the control electronics and gearbox for converting the low speed incoming rotation to high speed rotation suitable for generation of electrical energy and costs about one-third of total cost of wind turbine.

The structure support component includes the tower and rotor mechanism and costs about 15 % of the wind turbine cost. 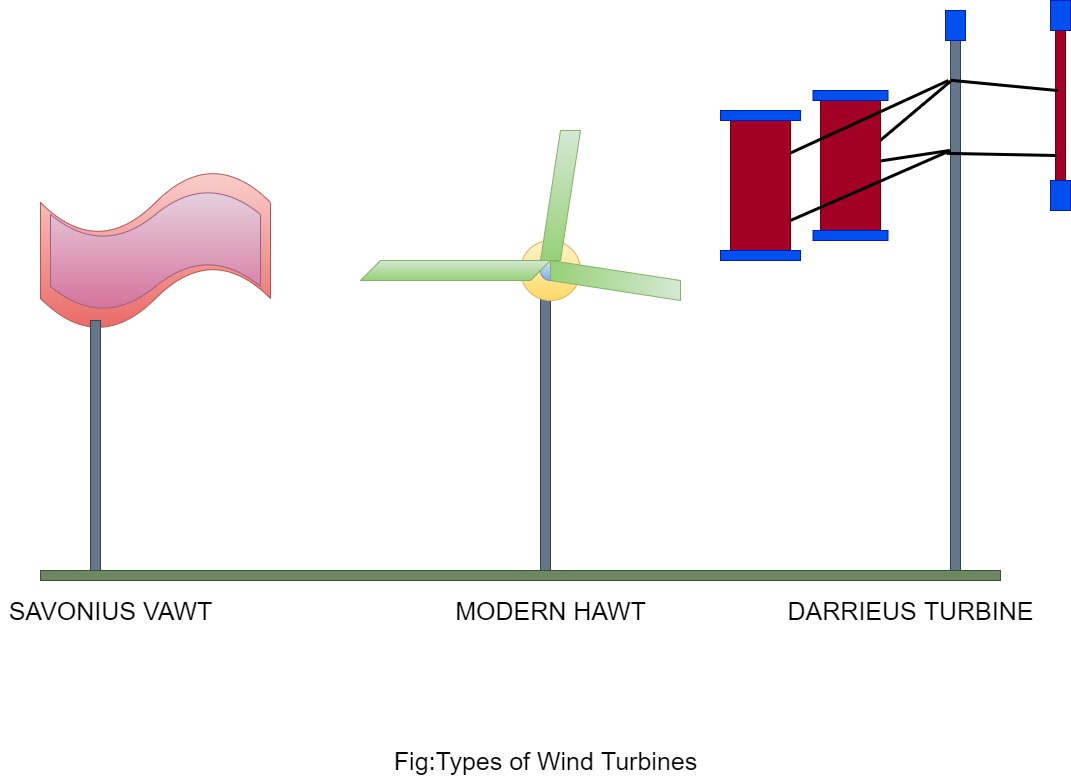 Turbines used in wind farms for commercial production of electrical energy are usually three-bladed and pointed into the wind by computer-controlled motors. These have high tip speeds of over 320 kmph, high efficiency and low torque ripple, resulting in good reliability. The blades are usually coloured light gray to blend in with the clouds and range in length from 20 to 40 m or more. The tubular steel towers ranges from 60 to 90m tall. The blades rotate at 10-22 rpm. At 22 rpm, the tip speed exceeds 90 m/s.

It has the main rotor shaft arranged vertically .with the vertical axis, the generator and gearbox can be placed near the ground, so the tower does not requires the support and is more accessible for the maintenance. They are usually installed nearer to the base on which they rests such as the ground or a building rooftop. The wind speed is slower at a lower altitude ,so less wind energy is available for a turbine of a given size.

WEG are the devices which converts the energy of the wind stream into energy of rotation. The combination of turbine and generator is called aerogenerator.

The fraction of free flow wind power that can be extracted by a rotor is known as power coefficient i.e

The maximum power coefficient is 0.593.

The amount of air passing per unit time, 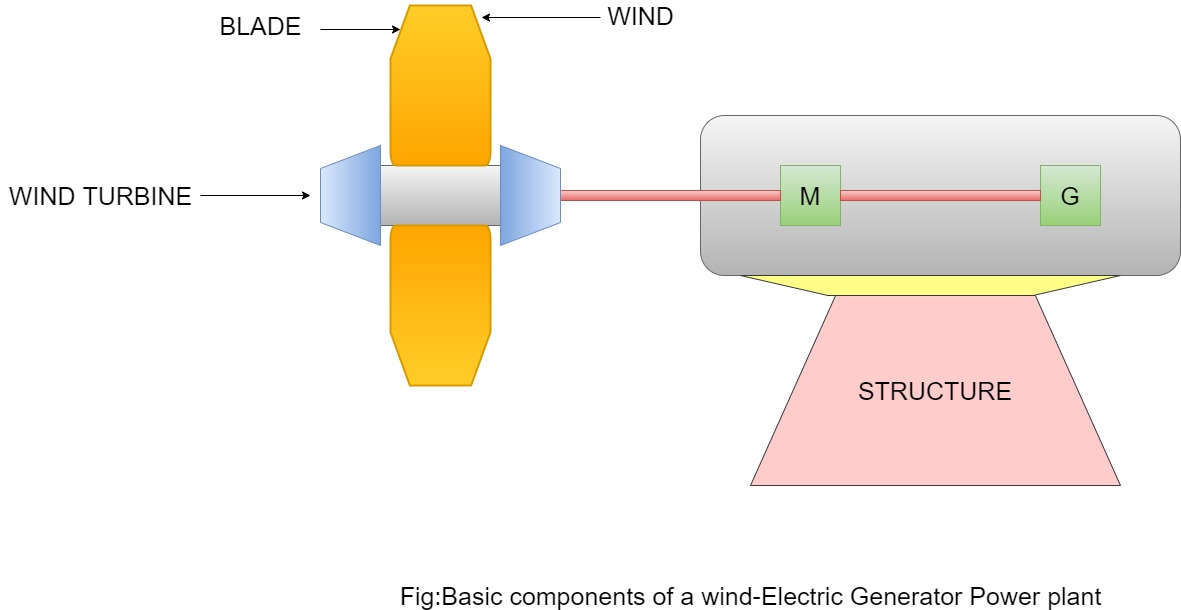