Superposition theorem states that” In an active linear network containing several sources(including dependent sources) , the overall response(branch current or voltage) in any branch in the network equals the algebraic sum of the responses of each individual source considered separately with all other sources made inoperative, i.e replaced by their internal resistances or impedances.”

For voltage sources to make a source inoperative it is short circuited leaving behind its internal resistance or impedance.

For current sources to make a source inoperative it is open circuited leaving behind its internal resistance or impedance.

The principle of superposition is the combined property of additivity and homogeneity.

Consider voltage sources V1 and V2 respectively. Applying the superposition theorem in the given circuit, 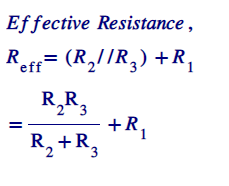 The current from the voltage source V1 is,

Now consider voltage source V2 and replace V1 by a short circuit. I” is the current in R3 resistance. 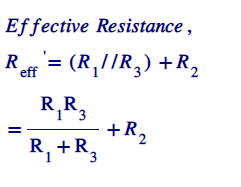 The current from the voltage source V2 is,

Now when we apply super position theorem, then current through resistance R3 is,