An ac circuit containing reactive elements(L and C) is said to be in resonance when circuit power factor is unity. Resonance means to be in step with. When applied voltage and circuit current in an ac circuit are in step with(i.e phase angle is Zero or power factor is unity) the circuit is said to be in electrical resonance. If condition exists in a series a.c circuit ,it is called series resonance. If the condition exists in a parallels a.c circuit, it is called parallel resonance. The frequency at which resonance occurs is called resonant frequency(fr). 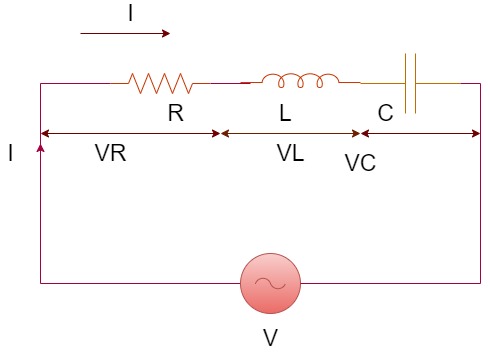 An R-L-C series ac circuit is said to be in resonance when the circuit power factor is unity i.e XL=XC. The frequency fr at which it occurs is called resonant frequency. The resonance i.e (XL=XC) in an RLC series circuit can be achieved by changing the supply  frequency  because XL & XC are frequency dependent. At a certain frequency fr, XL becomes equal to XC and the resonance takes place.

At a series resonance, 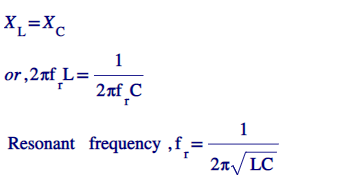 Form the above ,we can conclude that,

When the frequency of the applied voltages changes the impedance of the circuit varies because both(XL=2πfL) & (XC=1/2πfC) are  frequency dependent. Since XL=2πfL ,XL ∝ f so that variation of XL with f is a straight line passing through the origin. Again, XC=1/2πfC so that XC ∝ 1/f variation of XC  with f is a curve approaching the two axes. The resistance R is independent of the frequency and is thus represented by a line parallel to the frequency axis. The different between XL-XC is represented by the dotted lines. The differences reduces to Zero at  point A called fr and series resonance occurs. At series resonance Zr=R of the circuit is minimum so that current is maximum. At frequencies above and below the resonant frequency, the current is less than the maximum current. 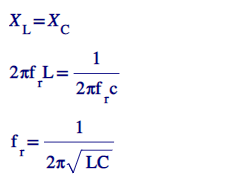 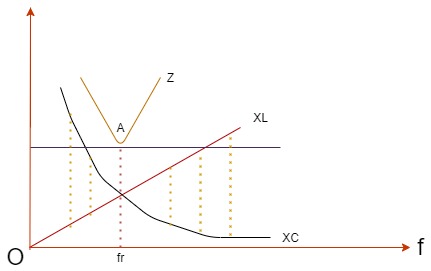 when series resonance occurs, the effect on the circuit is the same as though neither inductance nor capacitance is present. The current under this condition is dependent only on  the resistance of the circuit and voltage across it.

The Q-factor of a series resonant circuit can also be expressed in terms of L and C. 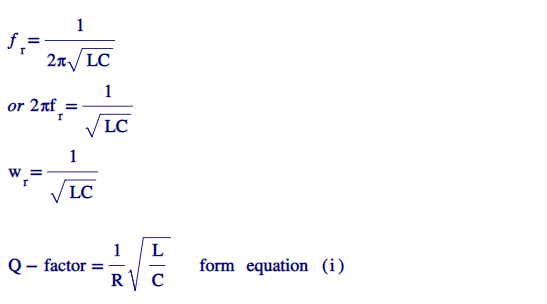 The value of Q-factor depends entirely upon the design of coil(i.e R-L part of R-L-C circuit) because resistance arises in this rather than in a capacitor. With a well designed coil, the Q-factor can be 200 or more .The Q factor of a series circuit indicates how many times potential differences across L or C is greater than the applied voltage at resonance.

Bandwidth of a series circuit 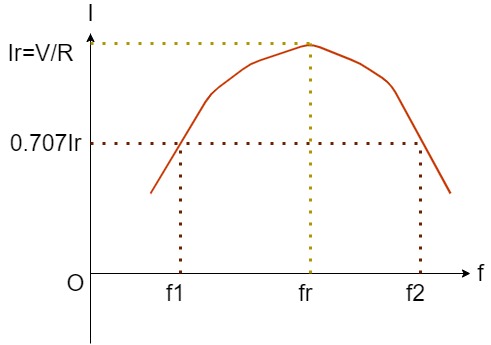 The bandwidth of a series circuit is defined as the range of frequencies over which circuit current is equal to or greater than 70.7% maximum current(Ir, current at resonance).

In an R-L-C series circuit changes with frequency. For any frequency lying between f1 and f2,the circuit current is equal to or greater than 70.07% maximum current (i.e Ir=V/R).Therefore f2-f1 is the bandwidth of the circuit.

where f1 and f2 are the limiting frequencies at which current is exactly equal to 70.7% of maximum value. The frequency f1 is lower cut-off frequency and the frequency f2 is called upper cut off frequency. The bandwidth of a series circuit means that the circuit will offer very low impedance to this frequency range. 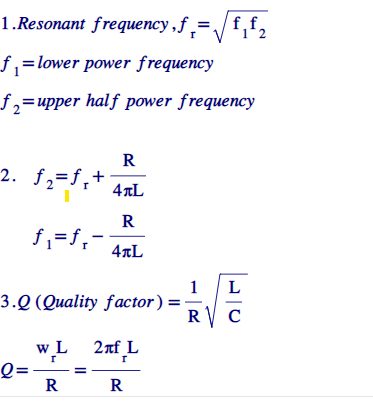 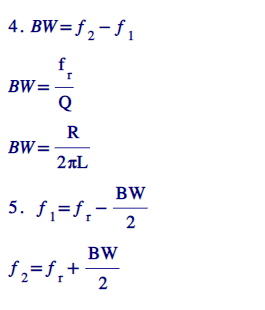