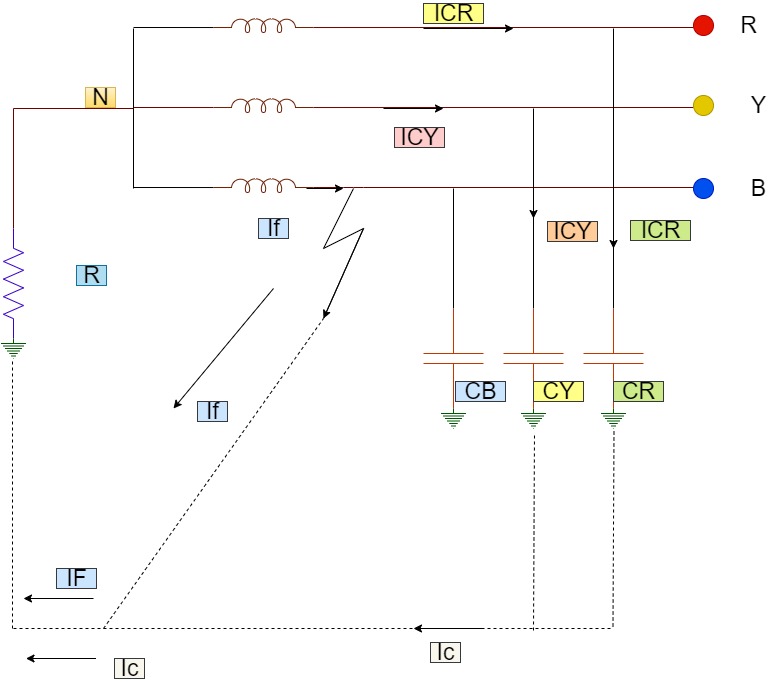 This type of grounding is used to limit the earth fault current.In this type of neutral grounding a resistor is inserted between the neutral and earth to limit the fault current to a safe value.The resistor used for the neutral grounding is usually a metallic resistance mounted on insulators in a metallic frame.For voltages below 6.6 kV liquid resistors are also used.Metallic resistors do not alter with time and need little or no maintenance.

The value of resistance used for neutral grounding should be such that the ground fault current does not exceed 3-phase short-circuit current.Neutral grounding resistors are normally designed to carry their rated current for a short period usually 30 second.

Fig B :Resistance Grounded system with Ground Fault on Line B 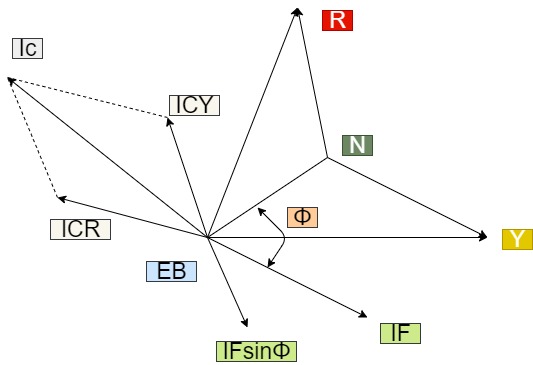 Fig C:Phasor diagram for resistance grounded system with ground fault on line B

When there is a ground fault over any phase,neutral is displaced and the maximum voltage across the healthy phases may become equal to line-to-line value.Fig B shows a ground fault on phase B of a resistance grounded system and the phasor diagram for such conditions is shown in Fig C. capacitive currents I CR and I CY leads V BR and V BY by 90°.Fault current IF lags behind the phase voltage of the faulted phase by an angle Φ,which depends upon the grounding resistance R and impedance of the system up to the fault point.The fault current IF can be resolved into two components ; one in phase with the faulty phase voltage and the other lagging the faulty phase voltage by 90°  (IF sinΦ) .The lagging component of fault current(I F sinΦ) is in phase opposition to the capacitive current IC(phasor sum of I CR and I CY).

In case of grounding resistance R is made sufficiently large so that the lagging component of fault current becomes less than capacitive current Ic,then the system conditions approach that of the isolated neutral system with the risk of high transient voltage occurrence.

The main features of resistance grounded neutral system are as follows:

Resistance grounding is usually employed for the system operating on voltage exceeding 3.3 kV but not exceeding 33 kV.For circuits below 3.3 kV(say 400 V exceeding 33 kV),the external resistance in the neutral circuit is unnecessary because the voltage available between phase and ground is only 230 V.The earth resistance of earthing electrode,earth connections is of the order of 1.5 ohm.The earth current is limited to 230/1.5 i.e 153 A even if the grounding resistance is not used.

Reactance grounding lies between effective or solid grounding and resonant grounding .The value of reactance required is to keep currents within safe limits.The transient voltages resulting from arcing increases as the reactance is increased.

The main features of reactance grounding are as follows:

Reactance grounding may be used for grounding the neutral of circuits where high charging currents are involved such as transmission lines,underground cables,synchronous motors,synchronous capacitors etc.For networks where capacitance is relatively low,resistance grounding is preferred.