Definition: The solar cell is a transducer or semiconductor which converts the suns radiant energy directly into electrical energy and is basically a semiconductor diode capable of developing a voltage of 0.5-1 volt and a current density of 20-40 mA/cm^2 depending upon the the material used and the conditions of sunlight.

The solar energy is directly converted into electrical energy by means of silicon wafer photovoltaic cells or solar cells. Solar cell operates on the principle of photovoltaic effect i.e. the process of generating an emf as a result of absorption of ionizing radiation.

Construction and working of photovoltaic cells

Photovoltaic effect can be observed in pure semiconductor such as silicon. In silicon there is no free charge carrier at ordinary temperature but if silicon is doped with phosphorous or arsenic then there will be one extra electron per atom of the impurity  leading to N-type semiconductor. similarly if another pieces of silicon is doped with boron there will be deficiency of electrons leading to P-type semiconductors. If these are connected by some means a junction at which the nature of the current carriers changes, is created. Thus the potential energy gap(Eg) is created at the junction. 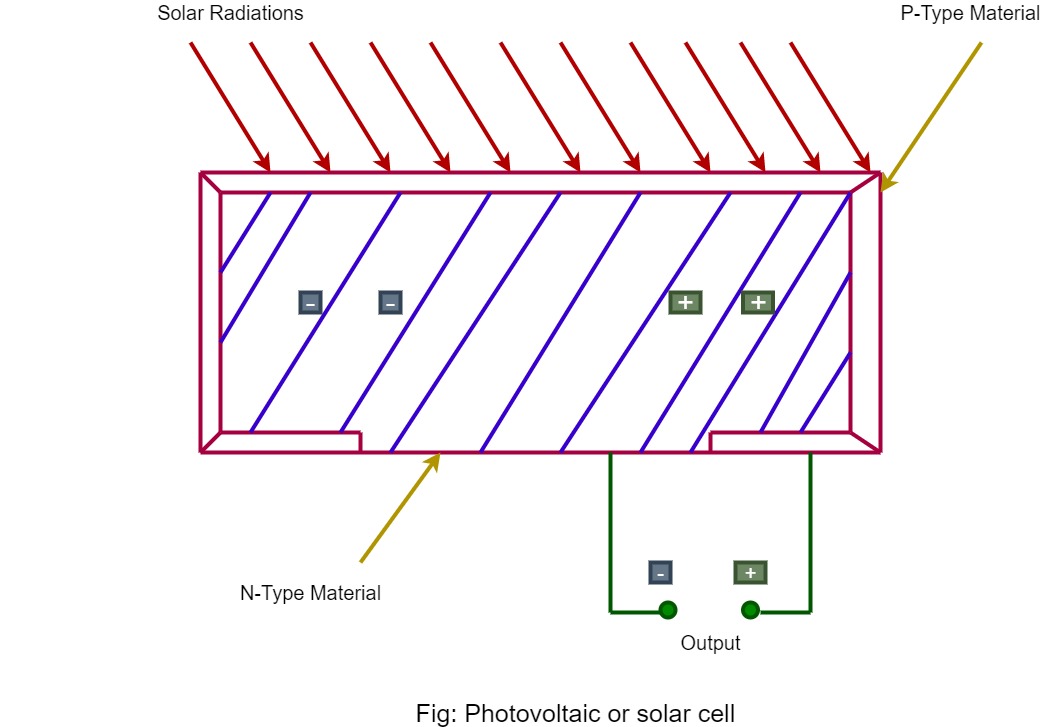 when a photon of energy ‘hv’ is allowed to fall on the P-region it is absorbed by an electron in the valence bond. If ‘hv’ exceeds energy gap Eg, the electron will migrate to the N-region. Similarly if ‘hv’ is less than Eg in the N-region, the photon will be absorbed by a hole which will migrate to P-region. This charge separation creates an electric field opposite to the electric field created by the diffusion of free electrons of the N-region and the field created by the charge separation predominates the electric filed created by the diffusion of free electrons from N-region to P-region and holes from P-region to N-region current will start flowing in the circuit.

One cell produces about 1.5 watt of power. Individual cells are connected together to form a solar panel or module, capable of developing 3 to 110 W power. Pannels are connected in series and parallel to make solar array which can produce any amount of wattage. Modules are usually designed to supply electricity at 12 V. Photovoltaic(PV) modules are rated by their peak watt output at solar noon on a clear day.

According to the types of crystal the solar cells are of three types: