What is P-type semiconductor?

The impurities which produces p-type semiconductors are known as acceptor impurities because the holes created can accept the electron. 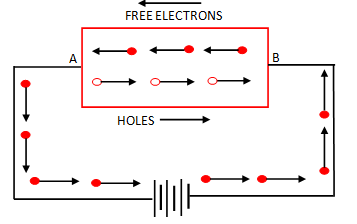 The current conduction in a p-type semiconductor is predominating by holes i.e positive charges and is called p type or hole type conductivity. When a potential differences is applied across the p-type semiconductor the holes (produced by impurity) in the crystal will drifts towards the negative terminal ,called hole current. In p-type conductivity the valance electron move from one covalent bond to another unlike the n-type where current conduction is by free electron.

On adding trivalent impurities into silicon such as Boron ,it is forced to bond with neighboring silicon atom, only three electron will participate in bonding and 4th is not present That is why hole formation takes place in the valance bond (the missing electron in the bond is called hole).The hole acts as a positive charge. Therefore, for each boron atom added one hole will be available in the silicon crystal .Through each boron atom added provides one hole ,yet an extremely small amount of boron impurity provides enough atoms to supply millions of holes.

Then, hole concentration is given by: 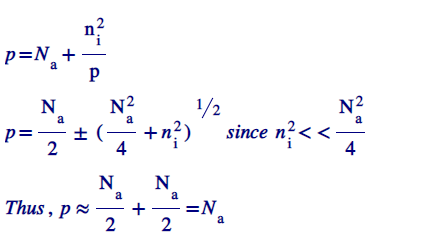 The conductivity in p-type semiconductor is mainly due to hole concentration which can be calculated by, 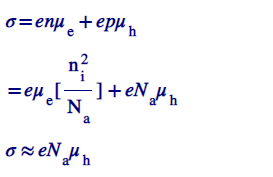 A lager number of holes in p type semiconductor are created by trivalent impurities such as boron, gallium, aluminum ,indium.

The binding energy is very small nearly equal to 0.05ev ,so at room temperature all the acceptor sites are ionized by thermal vibration in the lattice. When the boron accepts electron from neighbor using si-si bond ,the hole is shifted away from the boron to si-si bond in valence bond. The boron atom accepts an electron from si-si bond and resulting in semiconductor called p-type semiconductor.