The figure above shows the equivalent circuit of a 3-phase long transmission line on a phase-neutral basis. The whole line length is divided into n sections, each section having line constants (1/n )th of those for the whole line.

Let us consider an infinitely small length dx of the line at a distance x from the receiving end.

r=Resistance per unit of length of line

x=Reactance per unit length of line

b=Susceptance per unit length of line

g=conductance per unit length of line 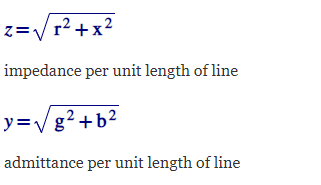 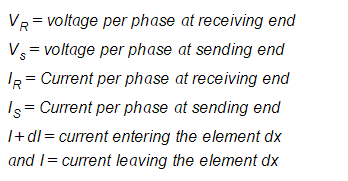 Series impedance of element dx of the line=Z dx

Shunt admittance of element dx of the line= y dx

dI=Vydx ,the current drawn by this element

Now, Differentiating equation (i) w.r.t x ,we get,

The solution of above differential equation is

A1 and A2 are unknown constants.

The value of V and I can be known from equation (iv) and (vi) in the form of unknown constant A1 and A 2 .Where A1 and A2 can be calculated by applying receiving end conditions,

Now applying the value of V and I in equation (iv) and (vi) we get,

Form equation (vii) and (viii) we have, 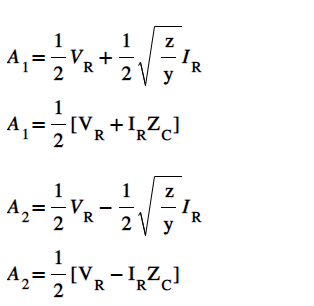 Now the expression for V and I become,

The sending end voltage Vs and sending end current Is can be obtained by substituting x=l in equation (xi) and (xii) we get,

It is helpful to expand hyperbolic sine and cosine in terms of their power series.

comparing the equation(xiii) and (xiv) with the general voltage and current equations of the line , we get, 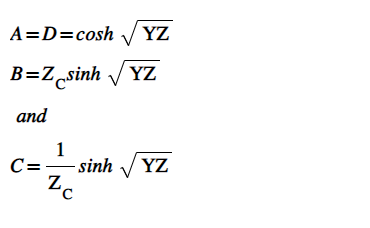