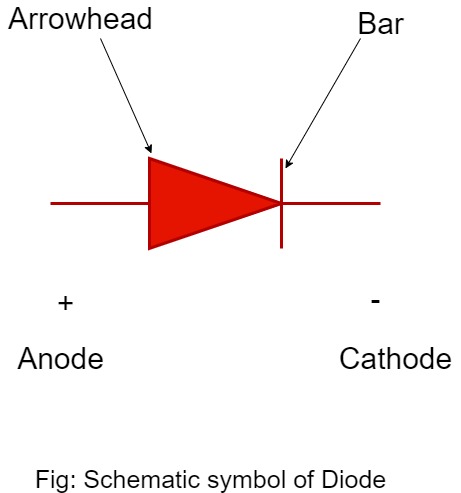 Diode are the electronic components which conducts current in one direction(unidirectional).A PN  junction is known as a semiconductor diode. Silicon and germanium are used in manufacturing the diode. The schematic symbol of diode is represented by

The arrow in the symbol indicates the direction of easier conventional current flow. A diode has the two terminals when it is connected in a circuit.

From the above figure: 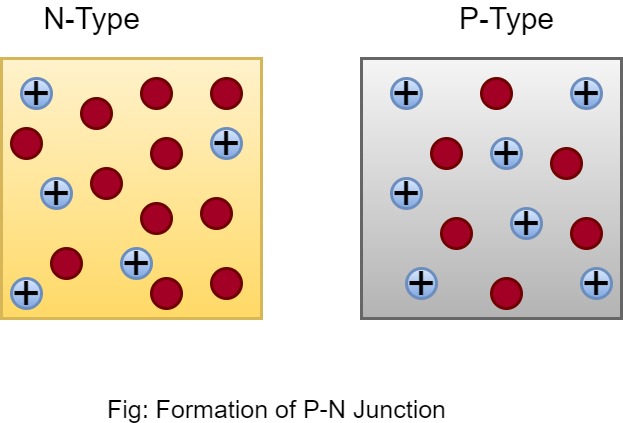 When PN junction  is formed ,the free electrons near the junction in the n region to diffuse across the junction into the p region. As the free electrons diffuse across the junction ,they combine with holes and leave a layer of positive charges(pentavalent ions) in the n-region and a layer of negative charges (trivalent ions) in the p-region. This forms a barrier potential as shown in figure. This action continues until the voltage of the barrier stops further diffusion. For the silicon, barrier potential is about 0.7V and for germanium it is about 0.3V. 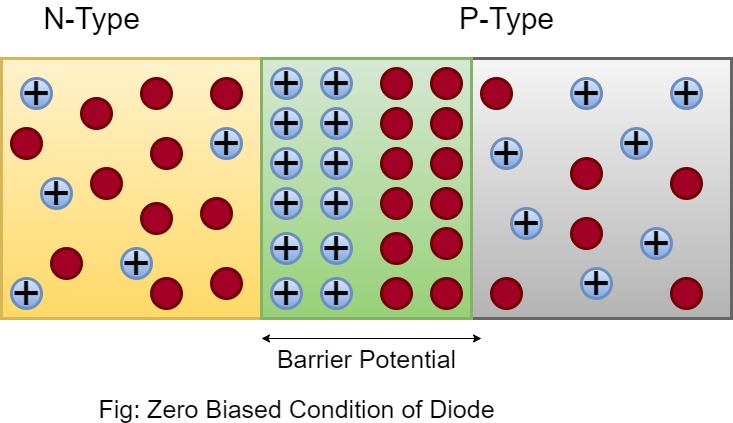 Biasing of the PN junction Diode

The terms bias refers to the use of a d.c voltage to establish certain operating conditions for an electronic device. There are two bias conditions for the PN junction diode i.e.

when a external d.c voltage applied to the PN junction diode is in such a direction that it cancels the potential barrier permitting the current flow ,  called forward biasing.

The positive terminal of the battery is connected to P-type and negative terminal to N-type. The applied forward potential establishes an electric filed which acts against the filed due to potential barrier. This results in weakened of the resultant filed and the barrier height is reduced at the junction. As the potential barrier voltage is very small(0.1V to 0.3V),therefore a small forward voltage is sufficient to completely eliminate the barrier. When the potential barrier is eliminated by the forward voltage ,junction resistance becomes almost Zero and a low resistance path is established for the entire path. Hence the current flows in the circuit called the forward current. 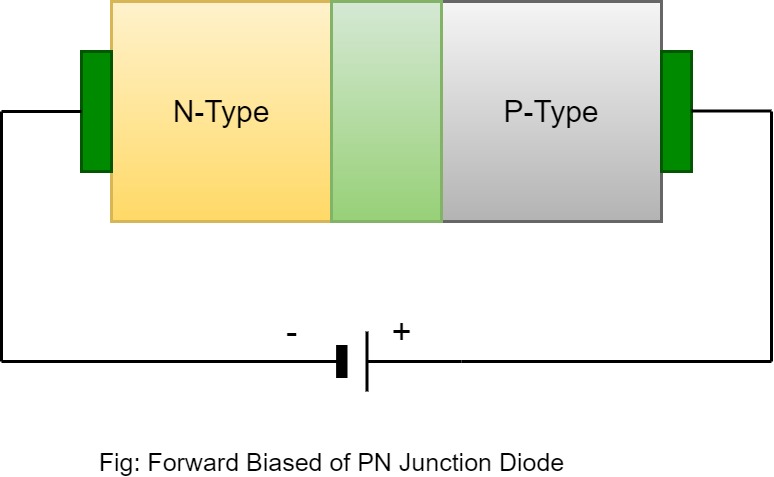 when a external d.c voltage applied to the PN junction diode is in such a direction that potential barrier is increased, blocking the current flow , called reverse biasing.

The negative terminal of the battery is connected to P-type and positive terminal is connected to N-type. The applied forward potential establishes an electric filed which acts in same direction as  the filed due to potential barrier. This results in increase of the resultant filed and the barrier height is increased at the junction. The increased in potential barrier prevents the flow of charge carriers across the junction. Hence a high resistance path is established for the entire circuit and current does not flow. 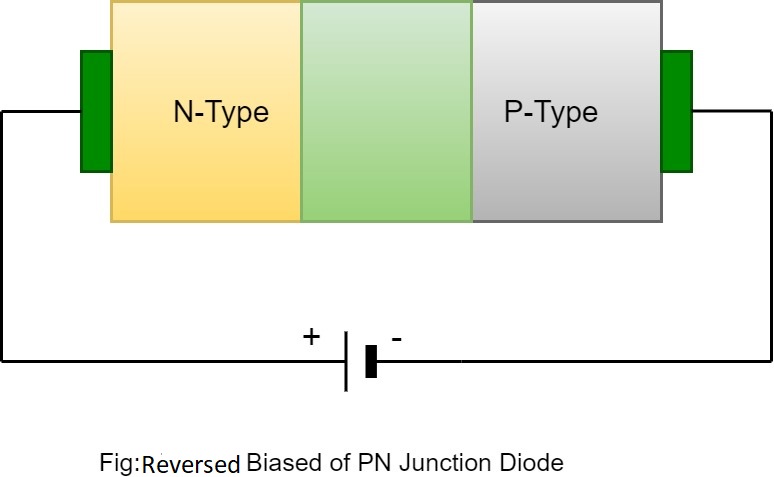 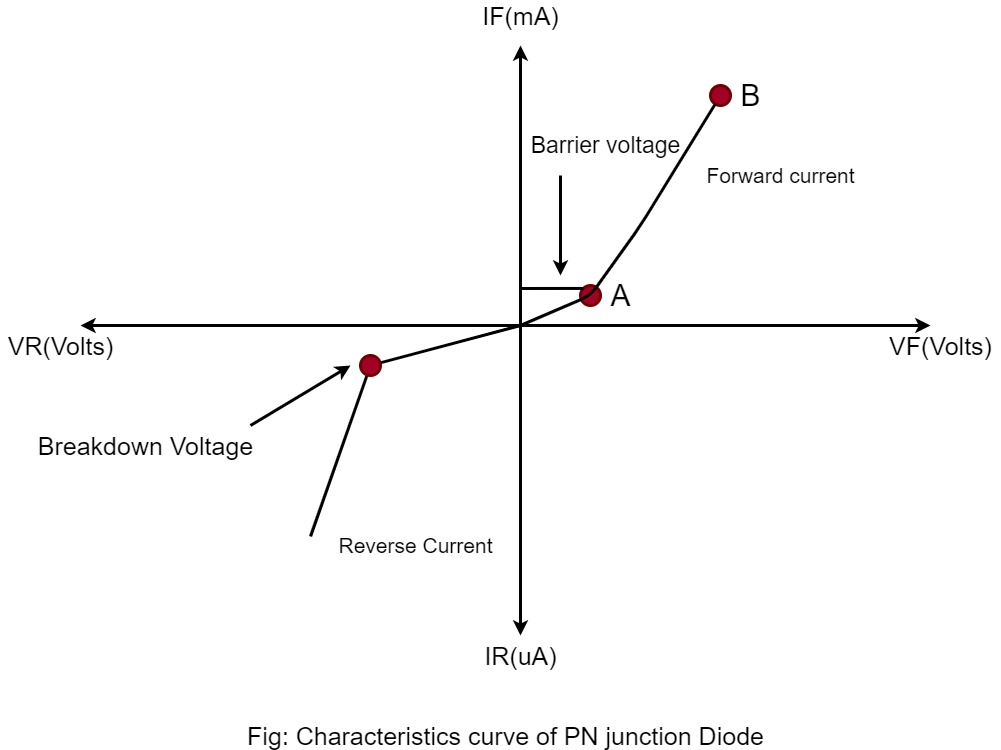 When the external voltage is Zero, the potential barrier at the junction does not permit current flow. The circuit current in this case is indicated by the point O in figure.

With the reverse bias to the PN junction diode i.e. p -type connected to negative terminal and n-type connected to positive terminal, the potential barrier is increased at the diode junction. There is no flow of current as the junction resistance becomes very high. A very small current(μA) flows in the circuit with reverse bias. This current is due to the minority charge carries.