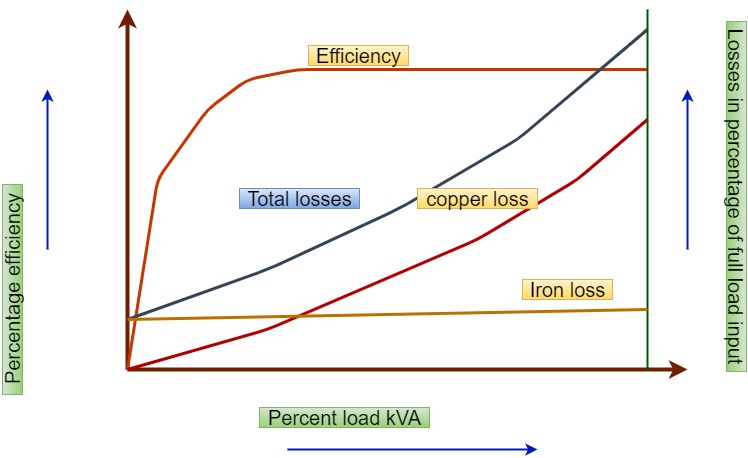 The efficiency of Transformer(η) is defined as the ratio of useful power output to the input power,the two being measured in same units(either in watts or kilowatts). 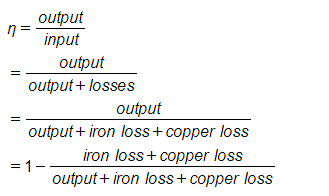 I2=secondary current at load and

cosΦ=power factor of the load.

The other ordinary transformer has a very high efficiency(96-99%).Transformer efficiency cannot be determined with high precision by direct measurement of output and input,since the losses are of the order of only 1-4%.The difference between the readings of output and input instruments is then so small that an instrument error as low as 0.5% would cause an error of the order of 15% in the losses.

The best way of determining the transformer efficiency is to compute losses from open-circuit and short-circuit tests and determine the efficiency as follows:

where x is the ratio of load current I2 to full-load secondary current,

The advantage of this method is that it is not necessary for the transformer to be loaded to its full-load rating during testing,and the kW rating of the test plant need be equal to the value of the individual transformer losses.

From the transformer efficiency we get,

where p is equal to the full load(rated output in volt-amperes or kVA) *load power factor(cosΦ),Pi is the iron loss,Pc is the full-load copper loss and x is the fraction of full-load kVA at which efficiency is maximum.

Now differentiating the both side of equation(i),we get,

Efficiency η will be maximum if

Hence the efficiency will  be maximum when variable loss(copper loss) is equal to constant loss(iron loss).

output current I2 corresponding to maximum efficiency is,

copper loss at given load at which efficiency is maximum=

and since for maximum efficiency to occur it is necessary that copper loss equals Pi,

or current corresponding to maximum efficiency,

Transformer efficiency is given by, 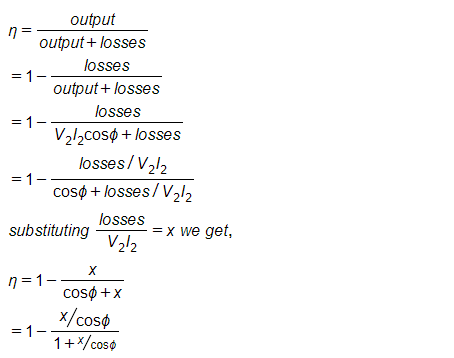 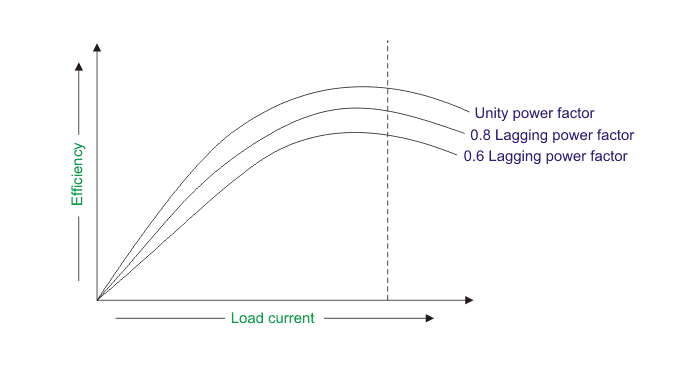 fig:variation of efficiency with power factor at different loadings for a typical transformer

Ans:Yes ,the efficiency of a transformer remains the same for a given load at a given power factor irrespective of the fact whether the Power factor is lagging or leading.

2.What is meant by all day efficiency  of a power transformer and why is it lower than commercial efficiency?

Ans:The all day efficiency also known as energy efficiency or operational efficiency is defined as the ratio of energy(kWh) output over 24 hours to the energy input over the same period.

For more notes on electrical engineering: