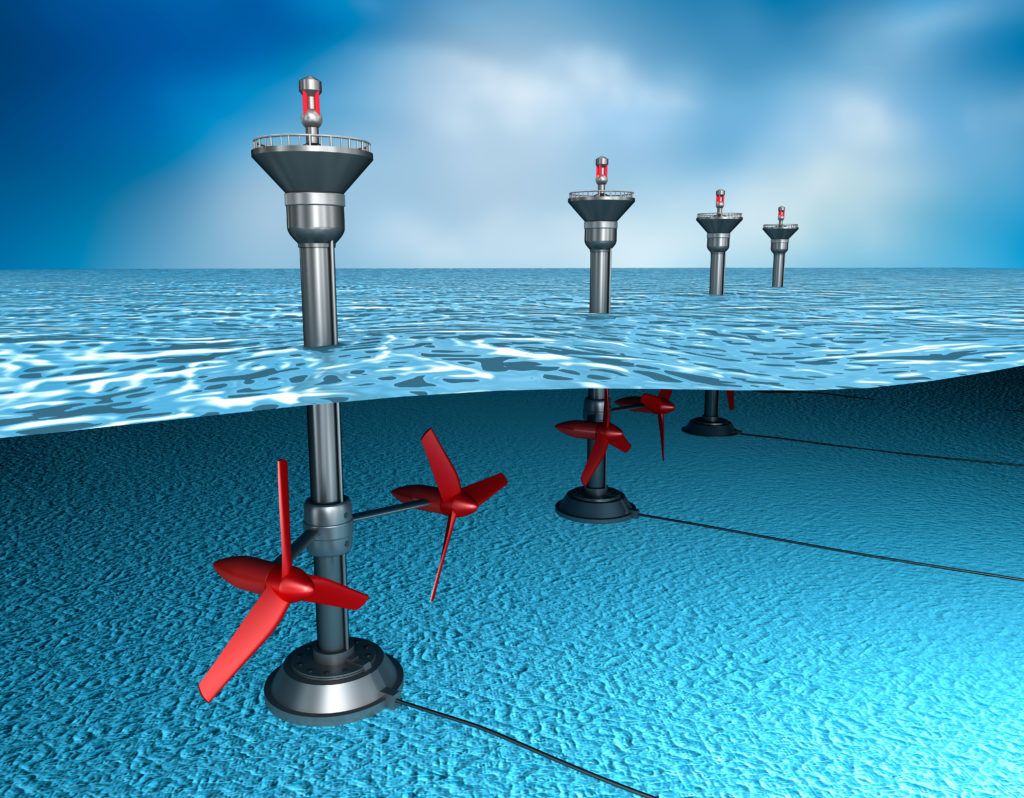 Tidal energy is the permanent source of energy. The rise and fall of tides nearly twice a day are associated with the rotation of earth every 24 hours in relation to both sun and moon. The tide amplitude may be considerable 18 to 21m have been noted near the Magellan strait and the shores of America. Tidal energy is difficult to harness and control. France, Germany ,UK ,Canada and USA has investigated in tidal energy generation. France at Rance Estuary has developed a power station of 240MW capacity since 1967.It has 24 units of bulb type turbines each of 10MW capacity. The annual output of this plant is around 540 million kWh.

The uses of tides for electric power generation is practical in a various site where geography of an inlet or bay favors the construction of a large scale hydroelectric power plant. For this, dam is needed to be built across the mouth of the bay. There will be large gates in it and also low head water turbines installed in it. For storing water in the storage basin the gates are opened at the time of high tide and after storing water the gates are closed. After the tide has receded, there is a working water head between the basin water and open sea and the water is allowed to flow back to the ocean through water turbines installed in the dam. Thus the tidal energy stored at height can be utilized to drive a turbine coupled to an electric generator and thus generate electricity.

The arrangement is simple and cheap but it is not useful to variation in output. By using reversible water turbine, the turbine can run continuously both during high tide and low tide. The principle of operation is costlier but provides greater flexibility and continuous power output.

Operation cycle for a Bulb unit 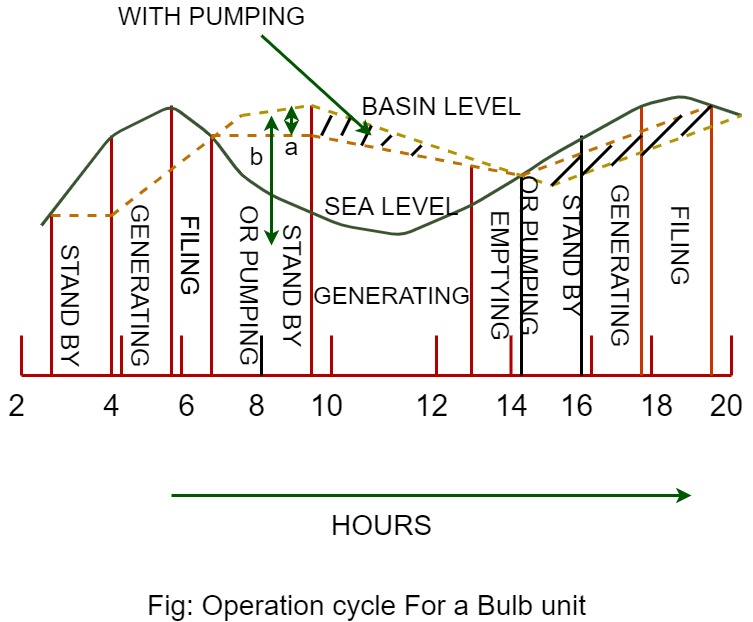 There are mainly three methods of tidal power generation as:

It uses kinetic energy of flowing water to drive power turbines as moving air is employed for driving windmills. This method is popular because of low cost and lower ecological impact compared to other systems.

It uses the potential energy in the difference in height between high and low tides. Barrages are essentially dams across the full width of a tidal estuary, and involve very high civil infrastructure costs, and drawbacks of a worldwide shortage of viable sites and environmental issues.

It uses the both kinetic and potential energy by constructing long dams of 30-50KM length from coast straight out into sea or ocean, without enclosing an area. Both the obstruction of the tidal flow by the dam as well as the tidal phase differences introduced by the presence of dam lead to hydraulic head differences along the dam.

There are various turbine designs and has different efficiencies and thus different power outputs.

The  energy available form these kinetic systems may be given by

To utilize the tidal energy, water is trapped at high tide behind a dam or barrage and then made to drive turbine coupled to an electric generator as it returns to sea during low tides.

The main components of tidal power plants are:

2. Sluice ways from basin to sea and vice versa:

Tidal power plants are classified on the basis of basins used in power generation. There are two types of basin systems:

Single basin systems is the simplest system of generating tidal power. The single basin system has only one basin. The basin is separated from the sea by a dam(barrage).The sluice way is opened during high tide to fill the basin. The turbine-generator units are mounted within the ducts inside the barrage.

The single basin systems are further classified as;

There are two basins at different levels. A dam is provided between two basins. The turbines are located in the dam. The sluice gates are provided in the dam. One basin is called the upper basin, the water level is maintained above that in the other, the low basin. The high level basin gates are called the inlet gates and low level gates are as outlet gates. The upper basin is filled with water. When the water  level in upper basin A provides a sufficient difference of head between the two basins ,the turbines are started. The water flows from basin A to basin B through the turbines and the power is generated. The power generation thus continues simultaneously along with filling up of water in basin A.

When the tide attains its peak value, the water level in basin A is maximum, the inlet sluices are then closed. The water flows from the upper basin to the lower basin through the turbines. Thus, the water in the upper basin falls and that in the lower basin rises. When the rising level in lower basin B becomes equal to the level of the falling tide, the outlet sluices are opened. When the tide reaches its lower most level, the output gates are closed .After some time the tide rises. When its level becomes equal to low level of the upper basin, the inlet gates are opened. The level of water in basin A starts rising. Thus, the cycle is repeated. 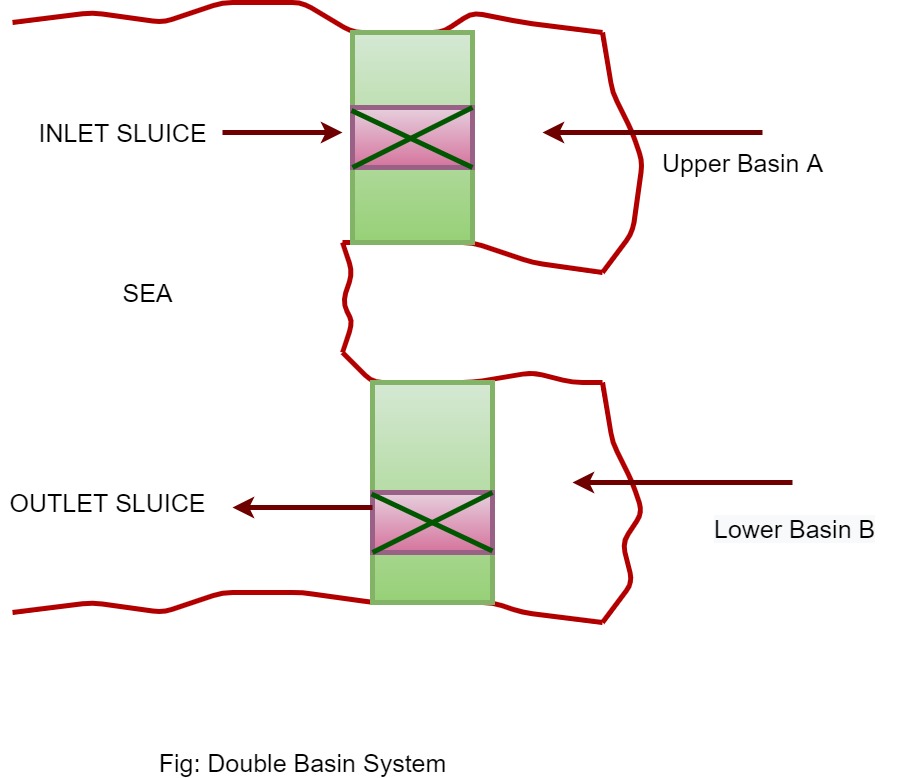