The transmission power lines will enter a distribution substation where the voltage will be stepped down to distribution levels where it will be distributed for use by industrial, commercial and residential customer. At these load points(industrial, commercial and residential customers), a transformer further reduces the voltage from 11 kV to 400 V to provide the last mile connection through 400 V feeders (also called as Low Tension feeders) to individual customers, either at 200 V (as single phase supply) or at 400 V (as three phase supply). 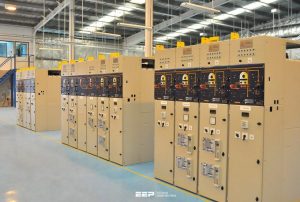 11 kV Feeder Line to End User
Since transmission voltage levels cannot be used by consumers it is required to step-down the transmission voltage to more usable voltages. The transmission power lines will enter a distribution substation where the voltage will be stepped down to distribution levels where it will be distributed for use by industrial, commercial and residential customer. Distribution networks are typically of two types, radial or Secondary selective (networked). A radial
feeder leaves the station and passes through the service area with no normal connection to any other supply. This is typical of long rural lines with isolated load areas.

A secondary selective system, having multiple connections to other points of supply, is generally found in more urban areas. These points of connection are normally open but allow various configurations by the operating utility
by closing and opening switches. Operation of these switches may be by remote control from a control center or by a lineman. The benefit of the networked model is that in the event of a fault or required maintenance a small area of network can be isolated and the remainder kept on supply. This system is usually used in Industries.

A lightning arrester (also called lightning diverter) is a device used on electric systems to protect the insulation and conductors of the system from the damaging effects of lightning. Lightning arrester is placed where wires enter
the transformer. DO fuse (drop out fuse ) is a combination of a fuse and a switch, used in primary overhead feeder lines and taps to protect distribution transformers from current surges and overloads. An over-current caused by a fault in the transformer or customer circuit will cause the fuse to melt, disconnecting the transformer from the line.Time of Day metering (TOD), also known as Time of Usage (TOU) or Seasonal Time of Day (SToD), metering involves dividing the day, month and year into tariff slots and with higher rates at peak load periods and low tariff rates at off-peak load periods. While this can be used to automatically control usage on the part of the customer (resulting in automatic load control),it is often simply the customer’s responsibility to control his own usage, or
pay accordingly (voluntary load control). This also allows the utilities to plan their transmission infrastructure appropriately. It consist of current transformer(CT) and potential transformer (PT) as shown in figure (a).
A Step down Transformer, steps down the input voltage i.e. the secondary voltage is less than the primary voltage. circuit breaker is an automatically operated electrical switch designed to protect an electrical circuit from damage caused by excess current from an overload or short circuit. Its basic function is to interrupt current flow after a fault is detected. Different types of CBs which are generally used are oil circuit breaker, air-blast circuit breaker, and vacuum circuit breaker and SF6 circuit breaker. Since transformer is most important device also an expensive device both primary and secondary side of transformer is provided with circuit breaker. The power to loads are supplied through transformer. 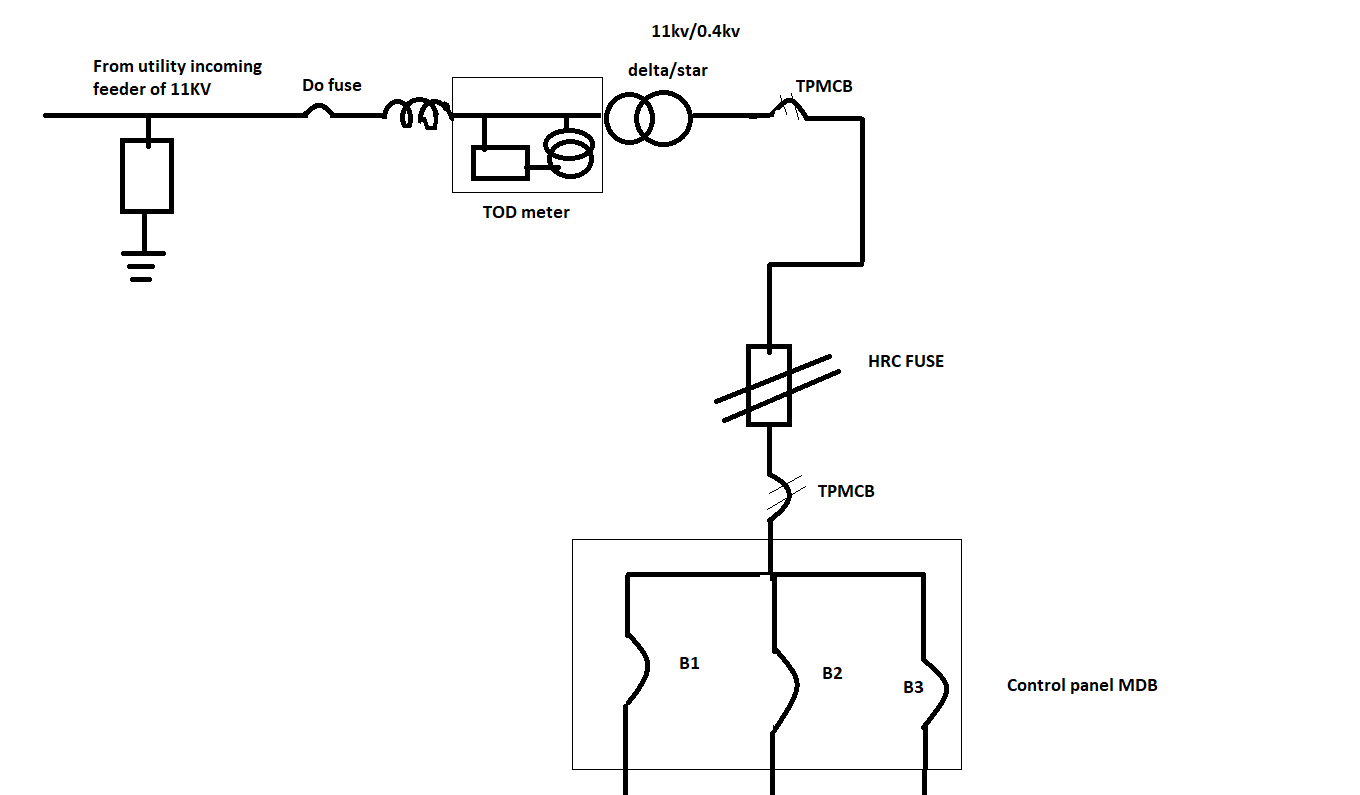 The objective of a protection scheme is to keep the power system stable by isolating only the components that are under fault, whilst leaving as much of the network as possible still in operation. Thus, protection schemes must
apply with very pragmatic and pessimistic approach to clearing system faults.The devices that are used to protect the electrical systems from faults are called protection devices.

Fuse is the current interrupting device which breaks or opens the circuit (in which it is inserted) by fusing the element when the current in the circuit exceeds the certain value.A fuse consists of a metal strip or wire fuse element, of small cross-section compared to the circuit conductors, mounted between a pair of electrical terminals, and (usually) enclosed by a non-combustible housing. The fuse is arranged in series to carry all the current passing through the protected circuit. The resistance of the element generates heat due to the current flow.

The size and construction of the element is (empirically) determined so that the heat produced for a normal current does not cause the element to attain a high temperature. If too high a current flows, the element rises to a higher
temperature and either directly melts, or else melts a soldered joint within the fuse, opening the circuit.

HRC fuse or High Rupturing Capacity Fuse is the type of fuse, where the fuse wire or element can carry short circuit heavy current for a known time period. During this time if the fault is removed, then it does not blow off otherwise it blows off or melts.The enclosure of HRC fuse is either of glass or some other chemical compound. This enclosure is fully air tight to avoid the effect of atmosphere on the fuse materials. The ceramic enclosure having metal end cap at both heads, to which fusible silver wire is welded. The space within the enclosure,surrounding the fuse wire or fuse element is completely packed with a filling powder. This type of fuse is reliable and has inverse time characteristic, that means if the fault current is high then rupture time is less and if fault current is not so high then rupture time is long.When the over rated current flows through the fuse element of high rupturing capacity fuse the element is melted and vaporized. The filling powder is of such a quantity that the chemical reaction between the silver vapor and the filling powder forms a high electrical resistance substance which very much help in quenching the arc. 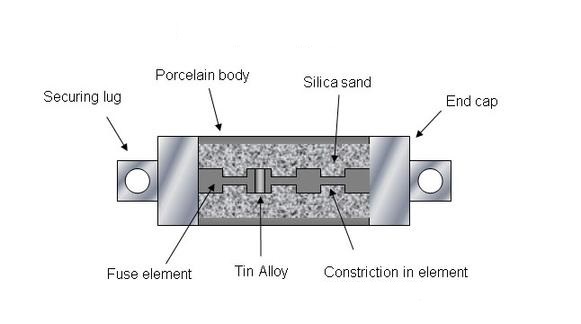 An MCB or miniature circuit breaker is an electromagnetic device that embodies complete enclosure in a molded insulating material. The main function of an MCB is to switch the circuit, i.e., to open the circuit (which hasbeen connected to it) automatically when the current passing through it (MCB) exceeds the value for which it is set. It can be manually switched ON and OFF as similar to normal switch if necessary. MCBs are of time delay tripping devices, to which the magnitude of over-current controls the operating time. This means, these get operated whenever overload exist long enough to create a danger to the circuit being protected.Therefore, MCBs does not respond to transient loads such as switches surges and motor starting currents. Generally, these are designed to operate at less
than 2.5 milliseconds during short circuit faults and 2 seconds to 2 minutes in case of overloads (depending on the level of current).
MCBs are used to perform many functions such as local control switches, isolating switches against faults and overload protection devices for installations or specific equipment or appliances.Under overload condition, the current through the bimetal causes to raise the temperature of it. The heat generated within the bimetal itself enough to cause deflection due to thermal expansion of metals. This deflection further releases the trip latch and hence contacts get separated. In some MCBs, magnetic field generated by the coil causes develop pull on bimetal such that
it deflection activates the tripping mechanism. 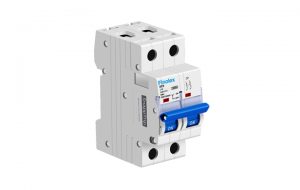 MCCBs are Moulded case Circuit breakers,with protection facilities of over-current, earth fault. it has a variable range of 50% to 100% operating current.They can be wired for remote as well as local operation both.They are manufactured for fault levels of 16KA to 50KA and operating current range of 25A to 630Amps.They are used for application related with larger power flow requirement. 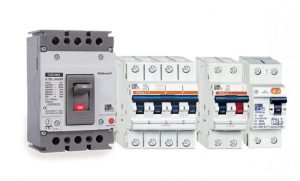 A major circuit fuse is also known as main breaker. Its function is to supply electricity to all circuits and outlet. Main switch is a master switch that shuts off all power in circuit.

An MDB is a panel or enclosure that houses the fuses, circuit breakers and ground leakage protection units where the electrical energy, which is used to distribute electrical power to numerous individual circuits or consumer points, is taken in from the transformer or an upstream panel. An MDB typically has a single or multiple incoming power sources and includes main circuit breakers and residual current or earth leakage protection devices. A MDB is comprised of a free standing enclosure, a bus bar system, MCCB’s, metering and support equipment and required current transformers. Panels are assembled in a systematic manner such as incomer section and outgoing
section.

Luminaries
A luminaire is defined as a complete lighting unit consisting of a lamp or lamps together with the parts designed to distribute the light, to position and protect the lamps and ballast (where applicable), and to connect the lamps to the power supply. Luminaires can be of the traditional type, such as a recessed or surface- mounted incandescent, fluorescent or other electric-discharge luminaires. Luminaires can also be of the non-traditional type, such as fiber optics with the light source at one location and the fiber core or light pipe at another. In this case, the fiber cable is providing the light distribution for the lighting system. There are also a number of products coming into the market place that employ light-emitting diodes (LEDs) as the light source.