This is the method of connecting the separate phases of three-phase system. This system is obtained by joining together similar ends, either the start or the finish , the others ends are joined to the line wire.The common point N is called neutral or star point at which the similar ends are connected.The voltage between any line and the neutral point i.e voltage across the phase winding is called the phase voltage and the voltage between any two outer is called the line voltage.The neutral point is connected to the earth. 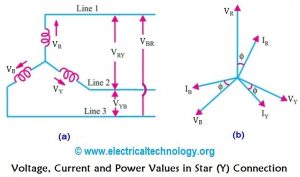 The arrow heads on emfs and currents indicate the positive direction.A positive directions of emfs are taken from star point outwards.The three phases is numbered as 1,2,3 or a,b,c or R,Y,B.usually it is numbered as R,Y,B i.e the three natural colors red,yellow and blue.There are mainly two phase sequences namely RYB and RBY. RYB is taken as positive and RBY as negative. 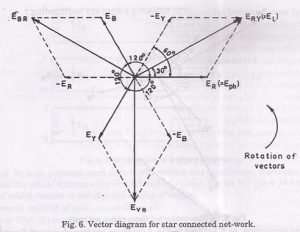 The emf induced in 3 phases are shown above.In star connection there are two windings between each pair of outer and due to joining of similar ends together the emf induced in them are in opposition.The potential difference between the two outer  known as line voltage,is the phasor difference of phases emfs of the two phases.

since phase angle between phasors

since in star-connected system each line conductor is connected to separate phase,current flowing through the lines and phases are same.

phase voltages and currents in a balanced three-phase circuit is written as:

where ψ is the phase angle between phase voltage and phase current.

The sum of the three second harmonic oscillating terms which have a progressive phase differences of 120 degree is Zero.The instantaneous power in a 3-phase balanced system is constant and equal to three times the average power per phase. 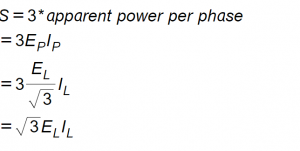 where cosψ is the angle between respective phase current and phase voltage(not between line current and line voltage). 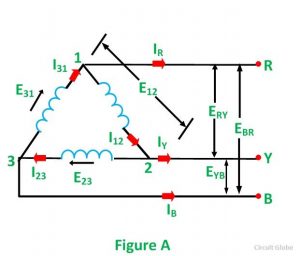 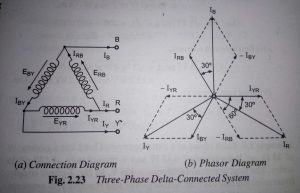 From the above figure,when the starting end of one coil is connected to the finishing end of another coil ,delta connection is obtained.The directions of emfs in the coil have been taken as positive from start end to finish end.The current phasors are shown in above figure: 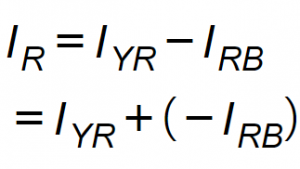 since phase angle between phase current phasors I YR and -I BR is 60°,

The phase current in each winding is equal and let it be equal to Ip.

since in delta-connected system ,only one phase is included between any pair of line outers,potential difference between the line outers,called line voltage and is equal to phase voltage. 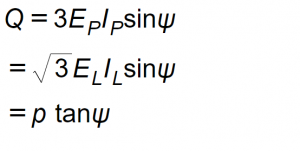 There will be no circulating current in the mesh if no load is connected to the lines.

Comparison between STAR and DELTA systems

Any balanced load system can be replaced by an equivalent delta-connected system or vice-versa because of relationship between phase and line voltages and currents.

For a balanced star-connecetd load, 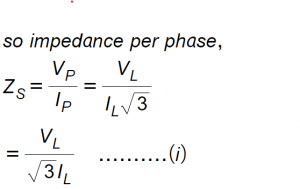 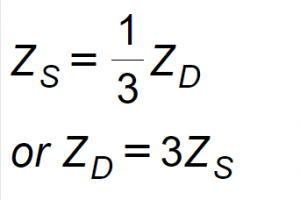