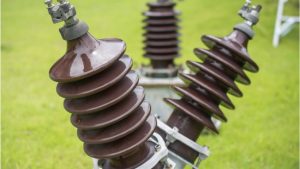 The important properties the insulator must have:

2. Porcelain: It is made from a fine homogeneous mixture of wet plastic clay(and silicon with other additives) which is covered with glaze.It is the most commonly used material for manufacture of insulators.Glazing is necessary to make the surface free from dirt and moisture.A porcelain must be completely air free. 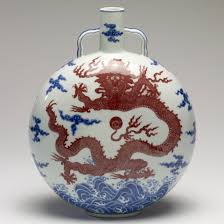 3. steatite :It has much high tensile and bending stress than porcelain.It is usually found combined with oxides in varying proportions. 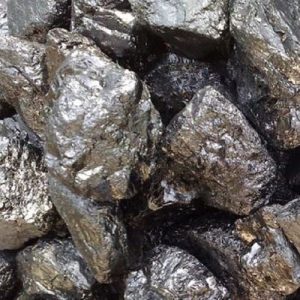 1.shackle:This type of insulator is used in low voltage lines and are very efficient and economical.Insulator is coated with extremely hard,smooth glaze.The wet flash-over and dry flash-over for shackle type insulator are 10KV and 25KV. Puncture voltage is about 35KV. Its operating voltage is 1000v. Its weight ,transverse mechanical load and total creepage distance are 0.5kg, 1150kg and 63mm respectively. 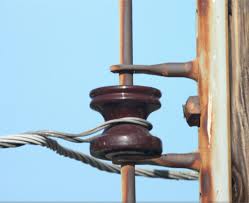 2. Pin:This type of insulator is used in the earliest days and used for supporting line conductors.It is mounted on a pin which in turn is secured to the cross arm of the pole,screwed on the pin and the line conductor is placed in the groove at the top of the insulator and is tied down with soft copper or soft aluminium binding wire.A soft metal thimble(lead ) is employed between the porcelain and the metal pin.The insulator and pin should be mechanically stronger to withstand the force due to weight of the conductor,wind pressure and ice loading. 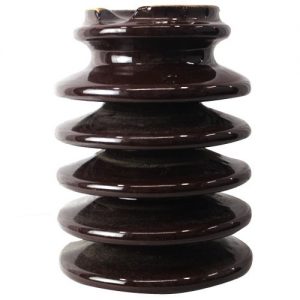  Compressive force on insulator due to wire

 Cost of insulator depends on weight of material 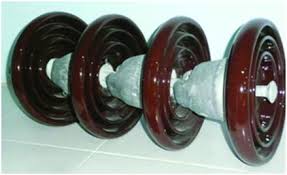 Tensile force on the conductor due to wire

4.post:Post insulator are commonly used for supporting bus-bars and isolating switches.It is similar to pin type insulator but has a metal base with a metal cap so that more than one unit can be mounted in series.

5.strain:In case of dead end of the line or the sharp corner or the line crosses river,the line is subjected to the greater tension.In such situation pin type insulator cant be used a sit cant bear the tension in the line.For the low voltage up to 11000v shackle type insulator can be used,but for the high voltage strain type insulator are used.The disc of strain insulator are employed in vertical plane whereas the suspension insulators are used in horizontal plane. 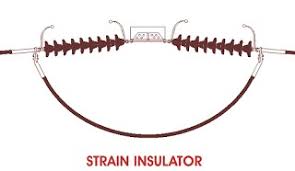 Failure of the insulators, results in the interruption of the power supply.It may occurs due to 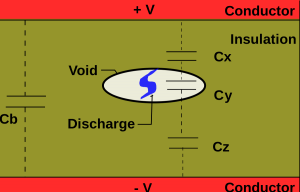 Normally its value is 10.

so,the air will experiences the electric field 10 times more than the solid experiences.so partial discharge should be avoided.

 Condition when 𝐸𝑐𝑟𝑒𝑒𝑝 > 𝑑𝑖𝑒𝑙𝑒𝑐𝑡𝑟𝑖𝑐 𝑠𝑡𝑟𝑒𝑛𝑔𝑡ℎ 𝑜𝑓 𝑎𝑖𝑟
Most high voltage insulators are designed with a lower flash over voltage than puncture voltage, so they flash over before they puncture, to avoid damage.
Dirt, pollution, salt, and particularly water on the surface of a high voltage insulator can create a conductive path across it, causing leakage currents and flash overs. The flash over voltage can be reduced by more than 50% when the insulator is wet. High voltage insulators for outdoor use are shaped to maximize the length of the leakage path along the surface from one end to the other, called the creep age length, to minimize these leakage currents.To accomplish this the surface is molded into a series of corrugations or concentric disc shapes. These usually include one or more sheds; downward facing cup-shaped surfaces that act as umbrellas to ensure that the part of the surface leakage path under the ‘cup’ stays dry in wet weather. Minimum creep age distances are 20–25 mm/kV, but must be increased in high pollution or airborne sea-salt areas.