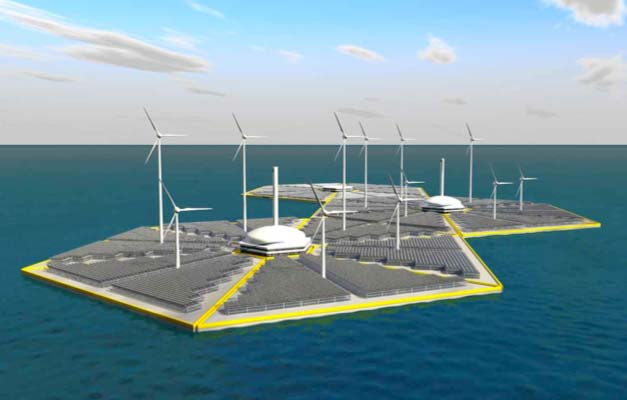 Ocean covers more than 70% of Earth’s surface making them the worlds largest solar collector. The sun’s heat warms the surface water a lot more than the deep ocean water and this temperature difference produces the thermal energy. The temperature difference can be utilized in a heat generator to generate electric power. This is called ocean thermal energy conversion(OTEC).OTEC has the potential to generate more energy than tidal wave and wind energy combined.

The OTEC systems can be open or closed. In a closed system, an evaporator turns warm surface water into steam under pressure. This steam rotates a turbine coupled to a electric generator. Water pumps bring cold deep water through pipes to a condenser on the surface. The cold water condenses the steam and the closed cycle begins again. In an open system ,the steam is turned into fresh water and new surface water is added to the system. A transmission cable carries the electricity to the store. 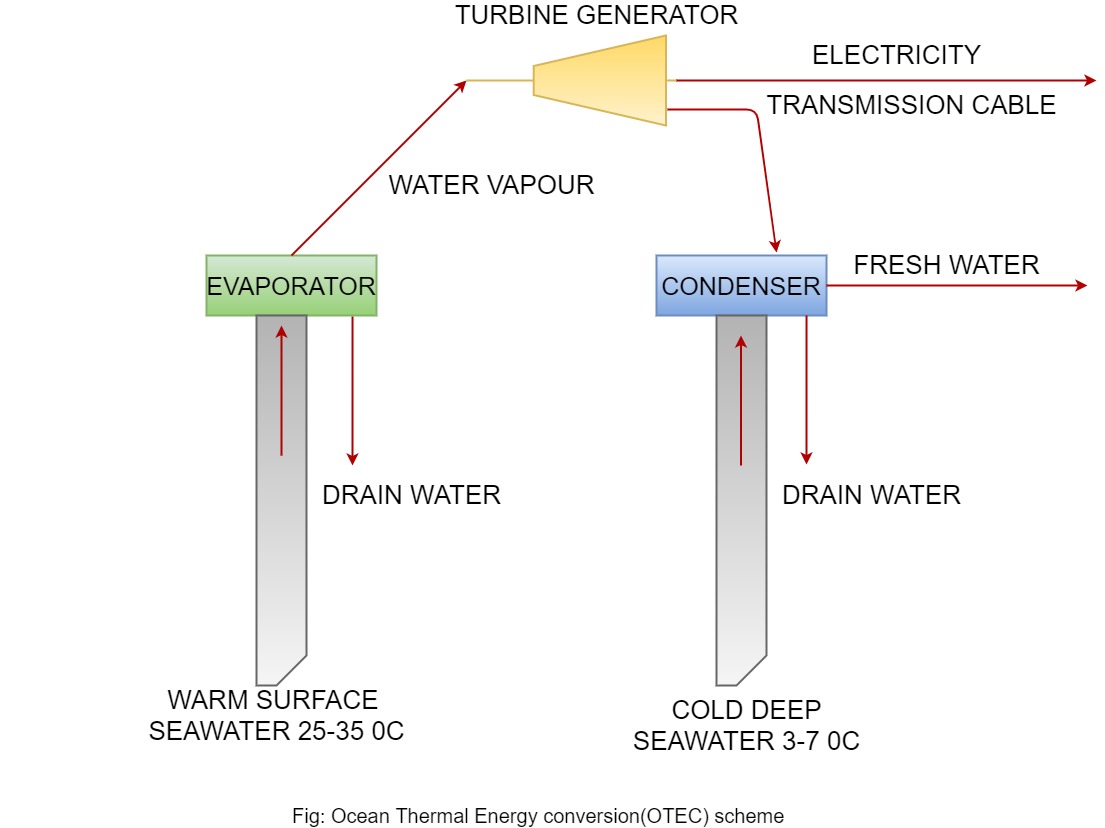 1.Power Plants Depending Upon Location

Power plants are constructed near land. Power plants can be installed in sheltered areas so that they are relatively safe from storms and heavy seas. Land based power plants can also support mariculture .Mariculture tanks or lagoons built on shore allows workers to monitor and control miniature marine environments. One disadvantages of land-based facilities arises from the turbulent wave action in the surf zone.

To avoid turbulent surf zone as well as to have closer access to the cold water resource, OTEC power plants can be mounted to the continental shelf at depths up to 100 m. A shelf-mounted plant could be built in a shipyard, towed to the site, and fixed to the bottom of the sea. Problem with shelf-mounted plants include the stress of open-sea conditions and more difficult product delivery makes the shelf-mounted plants less attractive.

Floating OTEC is designed to be operate off-shore. This type of power plant is more difficult to stabilize and the difficulty of mooring it in very deep water may cause problems with power delivery. Cables attached to the floating platforms are more susceptible to damage, especially during storms cables at depth exceeding 1000 m are difficult to maintain and repair.

Floating plants require a stable base for continuous OTEC operation. Major storms and heavy seas can break the vertically suspended cold-water pipe and interrupt the intake of warm water as well. To reduce this problems pipes can be made of relatively flexible polyethylene attached to the bottom of the platform and gimballed with the joints or collars. Pipes may need to be uncoupled from the plant to prevent storm damage. Surface water can be drawn directly into the platform form warm-water pipe. However it is necessary to prevent the intake flow from being interrupted during violent motions caused by heavy seas. 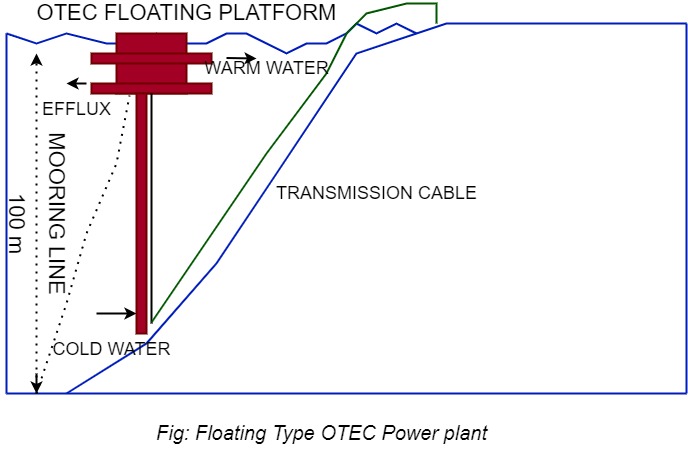 If the floating power plant is to be connected to power delivery cables, it requires the plant to remain relatively stationary.

2.Power Plants Depending Upon the cycle used

The cold seawater is an integral part of each of the three types of OTEC systems: closed-cycle ,open-cycle and hybrid.

In this system, fluid with a low boiling point, such as ammonia, is used to rotate a turbine coupled to an electric generator. Warm surface seawater is pumped through a heat exchange where the low-boiling fluid is vaporized. The expanding vapour rotates the turbo-generator. Then, cold ,deep water pumped through a second heat exchange condenses the vapour back into a liquid, which is then recycled through the system. 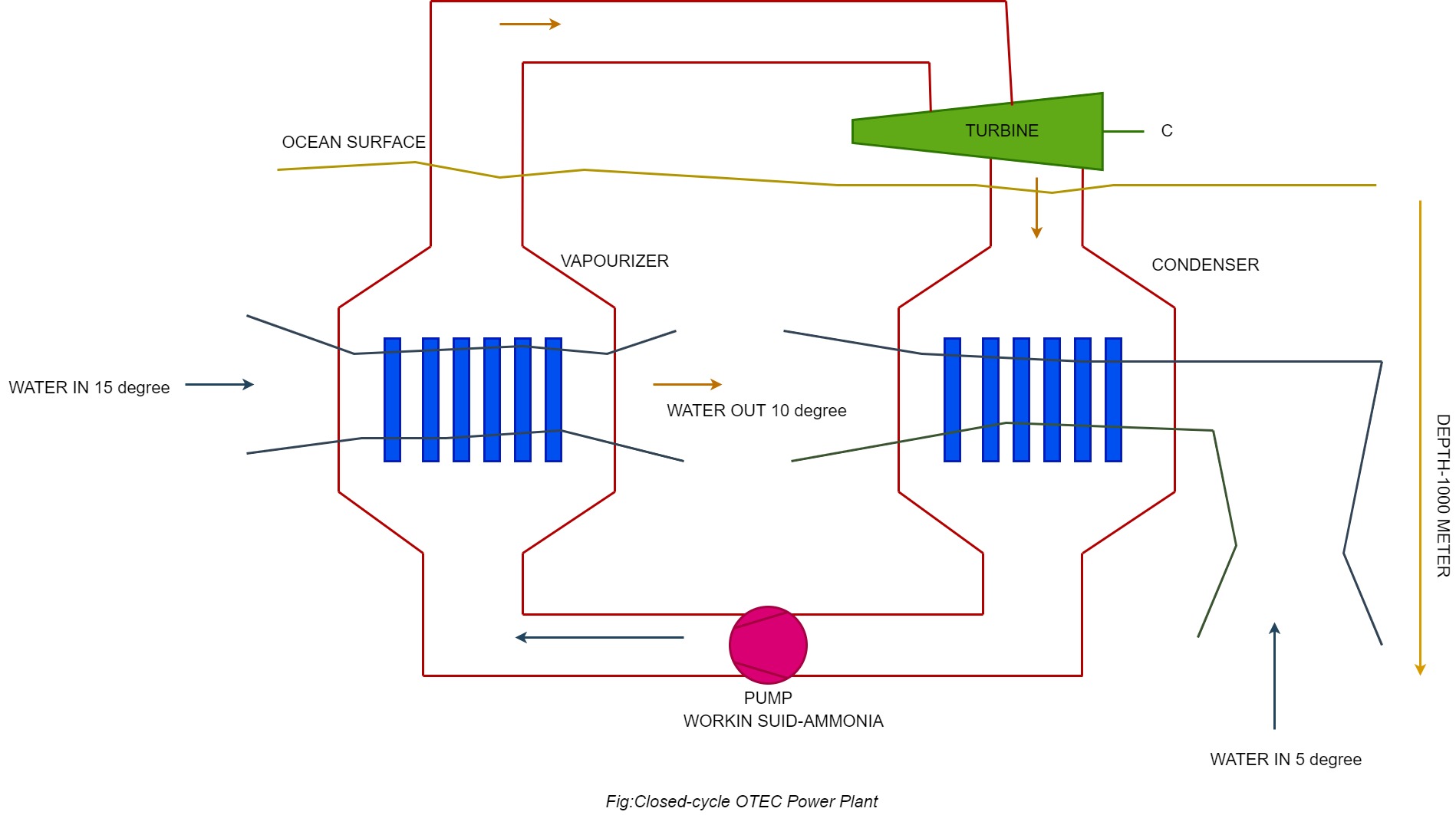 For closed-cycle systems,heat exchanger of very large size have to be designed and built and the working fluid is expensive.

In this system, the tropical oceans warm surface is used to produce electricity. When warm seawater is placed in a low-pressure container it boils. The expanding steam drives a low-pressure turbine coupled to an electric generator. The steam, which has left its salt and contaminants behind the low-pressure container, is pure fresh water. From deep-ocean water ,it is condensed back into a liquid by exposure to cold temperatures. 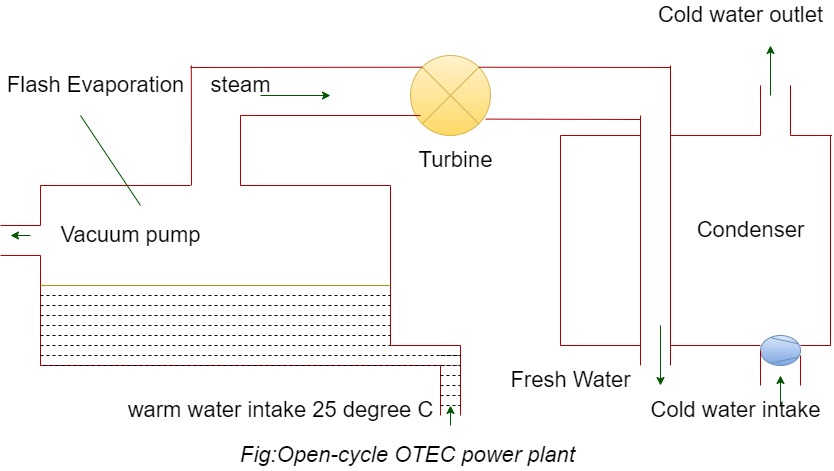 This method has a advantages of producing desalinized fresh water, suitable for drinking water or irrigation. For open-cycle, the problems associated with the design of evaporator, operation and maintenance are many.

A hybrid cycle combines the features of both the closed-cycle and open-cycle systems. In this system, warm seawater enters a vacuum chamber where it is flash-evaporated into steam, similar to the open-cycle process. The steam vaporizes the ammonia working fluid of a closed-cycle loop on the other side of an ammonia vaporizer. The vaporized fluid then drives a turbine coupled to an electric generator producing electricity. The steam condenses within the heat exchanger and provides desalinated water. This method has an advantages of producing a electricity which can be supplied to a utility grid or used to produce methanol, hydrogen, refined metals, ammonia and similar other products.