A magnetic circuit consists of a structure composed for the most of high permeability magnetic material.The core is assumed to be composed of magnetic material whose permeability is much greater than that of the surrounding air.The core is of uniform cross-section and is excited by a winding having N turns and carrying a current of I amperes.This winding develops a magnetic filed in the core.The magnetic filed is in terms of flux lines which form closed loops interlinking with the winding.

According to basic law of magnetic filed i.e Amperes`s circuital law ,the line integral of H around a close path is equal to the net current enclosed by that path i.e

This law provides a basic for calculation of magnetic circuits and helps to determine readily the strength of the magnetic field.

The flux produced in the coil on any magnetic circuit is proportional to the number of turns N and the current I .The product of NI is called the Magnetomotive force (mmf) and  helps to determine the amount of flux developed in the magnetic circuit.

The reluctance of the magnetic circuit is given by:

Permeability(μ0):When the flux Φ is constant over the length and uniform over the area,the quantity μ expresses the property of the magnetic material called permeability.Permeability is a measure of the receptiveness of the material having magnetic flux developed in it.

For the free space,the permeability

Total flux developed in the circuit is given by:

The above equation is called ohm`s law for the magnetic circuit sometimes.

For the magnetic circuit ,flux created is given by: 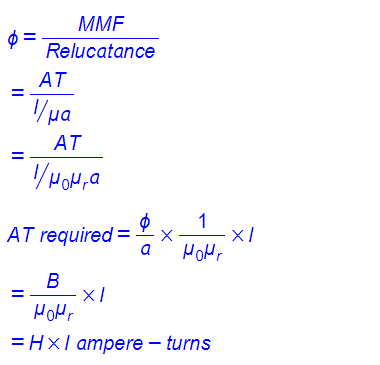 For the determination of Ampere-Turn for a magnetic circuit

A magnetic circuit with air gap is shown in the figure.Air gaps are mainly provided to avoid the saturation.An air gap is a volume of air between two magnetic surfaces.The length of air gap lg equals the distance between the two magnetic surfaces.The area of x-section of any one of the surfaces gives the air-gap area,ag. when the air gap length lg is much smaller than the dimensions of the adjacent core faces,the magnetic flux Φ is constrained essentially to reside in the core and the air gap and is continuous throughout the magnetic circuit.

since the permeability of air is constant,the air gap is linear part of the magnetic circuit and the flux density in the air gap is proportional to the mmf across the air gap.The mmf is calculated separately for the air gap and the iron portions and then added to determine the total mmf.

consider a circular ring made from different materials of lengths l1,l2 and l3 ,cross-sectional areas a1,a2 and a3 and relative permeability μr1,μr2 and μr3 respectively with a cut of length lg called air gap.The total reluctance is the arithmetic sum of individual reluctance as they are joined in series.

But for the magnetic circuit in parallel ,the ampere turns required for the combination is equal to the ampere-turns required to create the given flux in one path.

From the given circuit above,