When the magnetic circuits are subjected to time varying flux densities,mainly there are two causes of power loss in the form of heat in the iron core.The first losses is hysteresis loss and the second is the eddy current loss.Both of the losses are significant in determining the heating,rating,and efficiency of rotating electrical machines,transformers.

consider a ring of specimen circumference l meters,cross sectional area a meter square and having N turns of an insulated wire.Let the current flowing through the coil be of I amperes.

B=flux density at this instant.

The flux produces in the iron ring alters as the current flowing through the solenoid alters.Hence the emf(e’)is induced and given by, 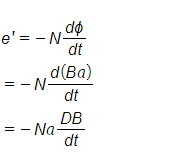 According to the Lenz’s law,this induced emf will oppose the flow of current.so therefore to maintain the current I in the coil the source of supply must have an equal and opposite emf. 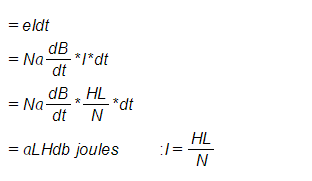 Thus the total work done or energy consumed during one complete cycle of magnetization,

This energy expended in taking specimen through a magnetic cycle is wasted as heat and termed as hysteresis loss.

For determination of hysteresis loss

area of loop is measured in units of H and B

one of the popular method for the calculation of the hysteresis loss is Steinmetz method.this methods states that hysteresis loss per cubic metre per cycle of magnetization of a magnetic material depends upon

η=constant for a given specimen,range of flux density and also known as Steinmetz hysteresis coefficient.

f=frequency of reversals of magnetization and

V=volume of magnetic material in m^3

Hysteresis loss can be minimized by choosing a core material with low hysteresis coefficient such as low carbon steel,silicon alloys,alloy steel.

Eddy current loss is given by ,

Ke = eddy current coefficient and depends upon the type of magnetic material used.

t=thickness of lamination in metres.

v=volume of core material in m^3.

To increase the core resistance and to minimize eddy currents magnetic cores subjected to alternating fluxes are assembled from thin sheets with an insulating layer between successive lamination. Hence the eddy currents loss can be minimized by using thin lamination.

Theory and performance of Electrical machines by JB GUPTA