Geothermal energy is the energy which lies embedded within the earth. Geothermal electric power plants are built on the edges of tectonic plates where high temperature geothermal resources are available near the surfaces. From the center of the earth, there are different zones such as

This is the most desirable form of geothermal energy. The steam is clean and easy to convert into electrical energy. Steam from the well is collected ,filtered to remove abrasive particles and passed through the steam turbines coupled to electric generators.

In dry steam plants, the steam is directed onto a closed water flow which on external contact becomes steam which in turn is used to move the blades of turbine. The spent water steam is then condensed back into water by condenser and then exposed again to the heat of dry steam. So ,this is a closed cycle system.

Wet steam plants gives the mixture of hot water and steam under high pressure. The steam is separated and expanded in turbines to generate electricity. The hot water is used for removal of its minerals and then used for agricultural or municipal purposes. The hot water is also used for the Desalination plants, air conditioning and refrigeration, heating of buildings ,district heating, animal husbandry and industrial processes.

For the conversion of geothermal energy into electrical energy, heat must be extracted first for its conversion into usable form. Mite-or-more-deep wells can be drilled into under ground reservoirs to tap steam and very hot water that drive turbines coupled to electric generators.

There are basically four types of geothermal power plants.

1.Flashed steam plants: The extremely hot water from drill holes which released from deep reservoirs high pressure steam i.e. flashed steam is released. The force of steam is used to rotate turbines. The steam gets condensed and is converted into water again, which is returned to the reservoir. 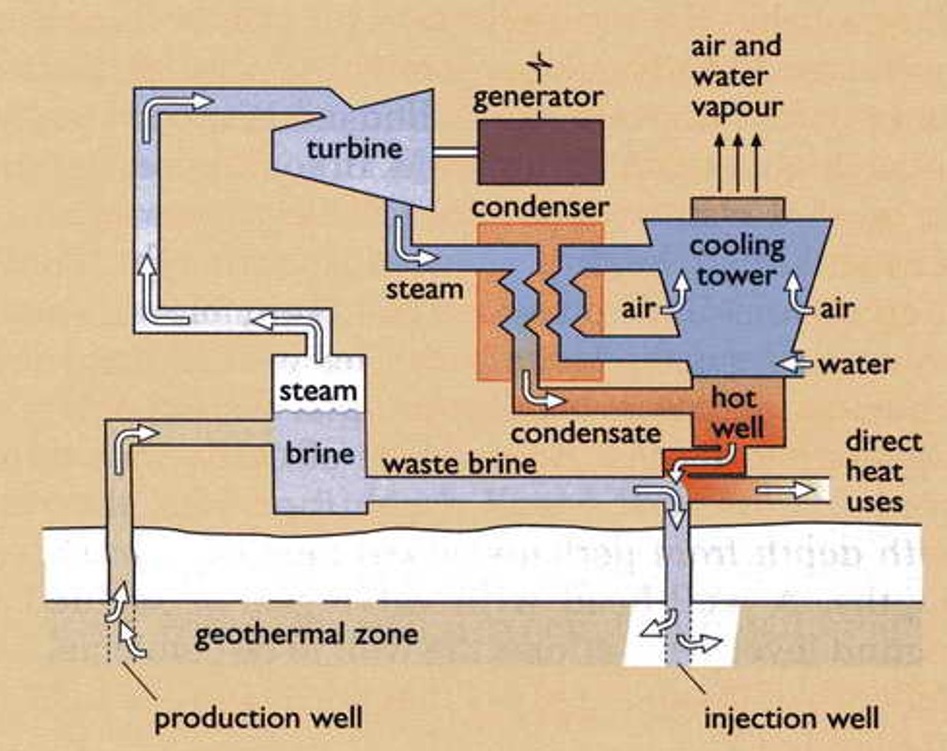 2.Dry steam plants: The main sources of dry steam are geysers. The geothermal reservoirs producing mostly steam and little water are employed in electric power generation schemes. As steam from the reservoir shoots out ,it is used to drive a turbine, after sending the steam through a rock-catcher. The rock-catcher protects the turbine from rocks which come along with steam. Dry” steam extracted from natural reservoir 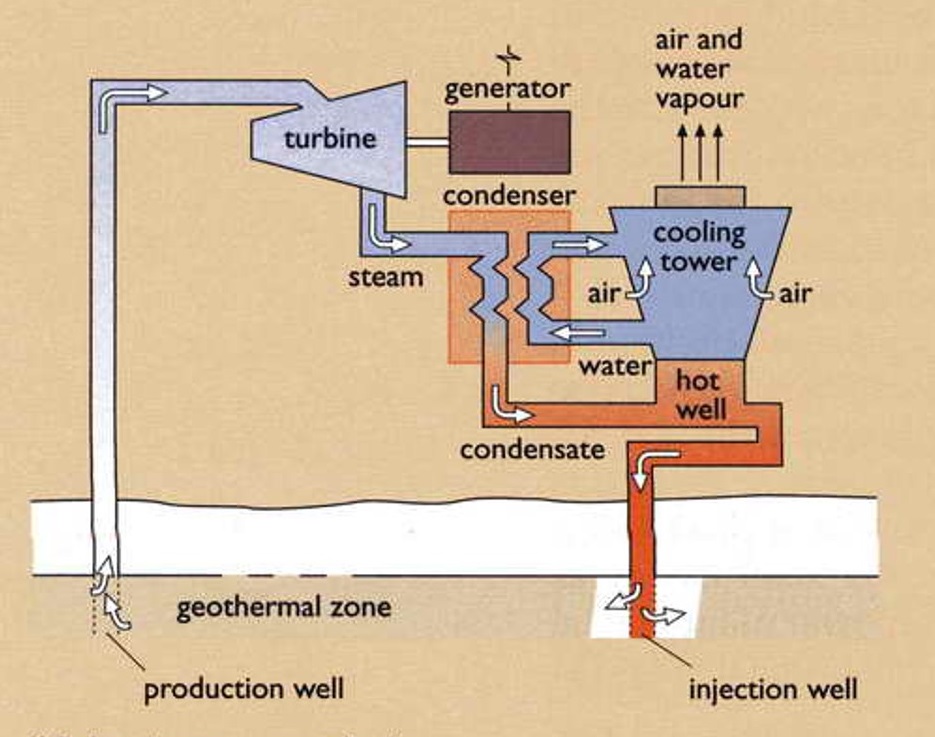 3.Binary power plants: The geothermal water is passed through a heat exchanger where its heat is transferred to a secondary liquid. Because of double-liquid heat exchanger system, it is called binary power plant. The secondary liquid i.e. working fluid should have lower boiling point than water. It turns into vapor on getting required heat from the hot water. The vapor from the working fluid is employed for rotating the turbines. There is minimum chance of heat loss in this system. 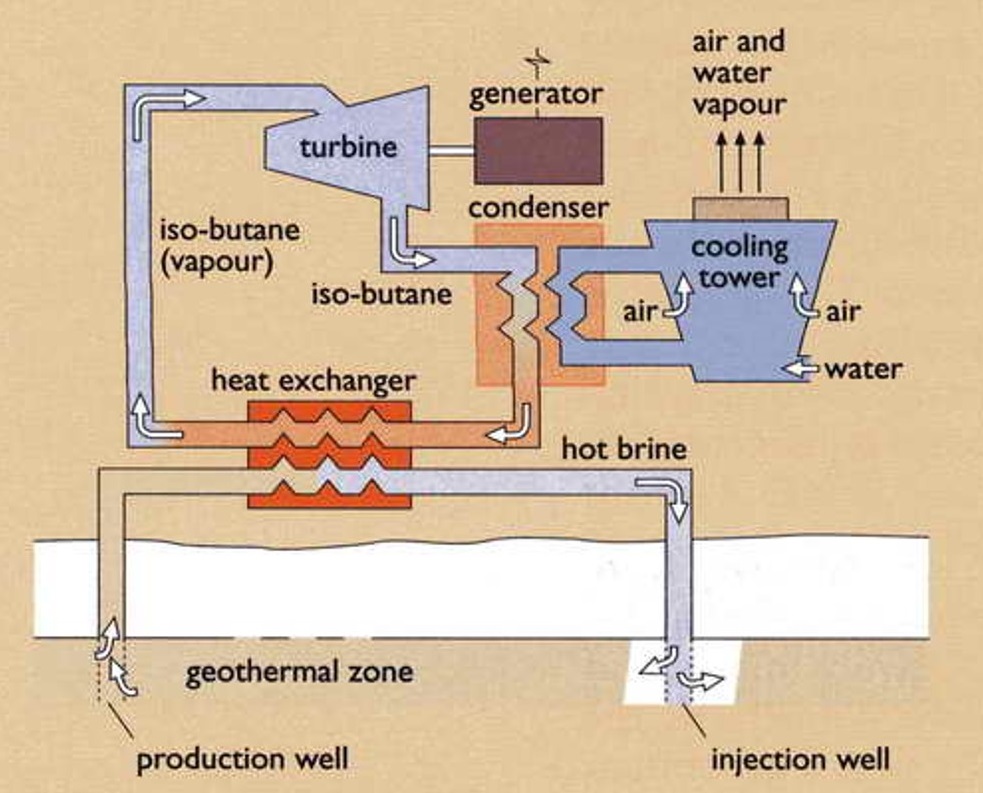 4.Hybrid power plants: In this system of power generation, the flashed and binary systems are combined to make use of both steam and hot water. But the efficiency of hybrid power plants is less than that of dry steam plants. 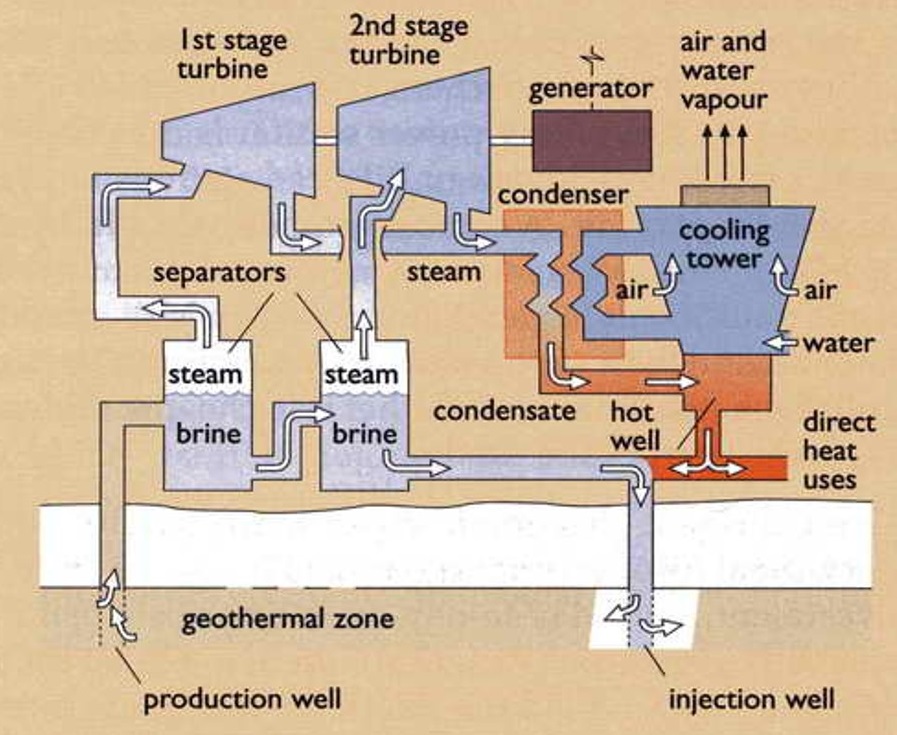