This effect is due to voltage drop across the line inductance,due to charging current,being in phase with the applied voltage at the sending end of the line.Both capacitance and inductance are necessary to cause this phenomenon.Hence the ferranti effect is negligible in case of short transmission lines as the inductor of such line is nearly equal to zero.For 300km line operating at a frequency of 50Hz,the no load receiving end voltage is found to be 5% higher than the sending end voltage.

Detail explanation of the Ferranti effect by considering a nominal pi (π) model:

A transmission line can be considered to compose a considerably high amount of capacitance and inductance distributed across the entire length of the line. Ferranti effect occurs when current drawn by the distributed capacitance of the line itself is greater than the current associated with the load at the  receiving end of the line(during light or no load).This capacitor charging current leads to voltage drop across the line inductor of the transmission system which is in phase with the sending end voltage.This voltage drop keeps on increasing as we move towards the load end of the line and the receiving end voltage tends to get larger than applied voltage leading to the phenomenon called ferranti effects in power system.

Now in case of a long transmission line it has been practically observed that the line electrical resistance is negligibly small compared to the line reactance,hence we can assume the length of the phasor IcR=0;we can consider the rise in voltage is only due to OA-OC=resistive drop in the line.

Now if we consider Co and Lo are the values of capacitance and inductor per km of the transmission line,where l is the length of the line.

This the capacitive reactance

Now the inductive reactance of the line =wLol

thus the rise in voltage due to line inductor is given by,

is constant for all overhead lines and is equal to the velocity of propagation of electromagnetic waves.And is nearly equal to 3*10^5 km/s.

so rise in voltage at the receiving end, 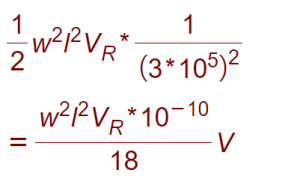 From the above equation it is absolutely evident,that the rise in voltage at the receiving end is directly proportional to the square of the line length,and hence in case of a long transmission line it keeps increasing with length and even goes beyond the applied sending end voltage at times,leading to the phenomena called ferranti effect in power system.

How to reduce the ferranti effects?