The generated electrical energy is distributed form the urban areas and delivered to the ultimate consumers through a network of transmission and distribution.There may be the variation of voltage at the consumers terminal which may cause erratic operation or even malfunctioning of the consumers appliances such as motors,lamps and other load.The main cause of the voltage variation is the variation in the load on the supply of the system.With the increase in the load on the supply system the voltage at the consumer premises falls due to increase in voltage drop in

The voltage limit must be ±6% of declared supply voltage to operate the appliances satisfactorily.We can install the voltage controlling equipment’s such as

But in case of ac supply system the voltage can be controlled by various methods:

The main requirements of an excitation systems are:

Mainly there are three types of excitation systems:

The output of the exciter is regulated by an automatic voltage regulator(AVR) for controlling the output terminal voltage of the alternator.The current transformer input to the AVR limits the alternator current during fault.when the filed breaker is opened ,the field discharge resistor is connected across the field winding so as to dissipate the stored energy in the field winding which is highly inductive.The main and pilot exciters can be either driven by the main shaft or separately driven by motor.Direct driven exciters are usually preferred as these preserve the unit system of operation and the excitation is not affected by the external disturbances.

This system consists of an alternator and thyristor rectifiers bridge directly connected  to the main alternator shaft. 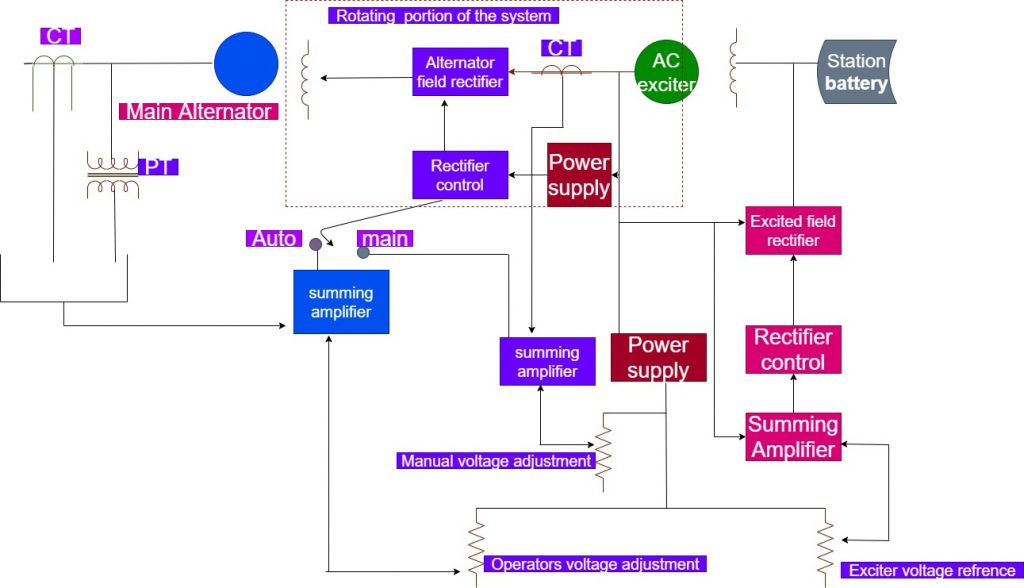 This system comprises of an ac exciter having a stationary field and a rotating armature.Full-wave thyristor bridge rectifier circuit rectified exciter output which is supplied to main alternator field winding. The alternator field winding is also supplied from the exciter output through another rectifier circuit.The power supply and rectifier control, as a part of rotating machine, generates the required phase controlled triggering signals in response to a dc control level fed by the voltage regulator.

The alternator voltage signal is averaged and compared directly with the operators voltage adjustment in the auto mode of operation.In the manual  mode of operation the excitation current of the alternator is compared with a separate manual voltage adjustment and supplied to the rotating thyristor bridge through separate regulating elements.The exciter voltage is averaged,compared with the exciter voltage references and applied to the rectifier control and rectifier.

This system also provides the over voltage protection,over current protection in the exciter field control,lead-lag compensation for stabilization of voltage control,watt and VAR signals for regulating the voltage and field discharge resistor.

Brushless excitation system are most popular system.Silicon diodes and thyristor made it possible to have compact rectified system converting ac to dc at higher power levels.The excitation system comprises of an alternator rectifier main exciter and a permanent magnet generator(PMG) pilot exciter.Both are driven by directly from the main shaft.The main exciter has a stationary field and a rotating armature directly connected through silicon rectifiers to the field of the main alternator.The pilot exciter is a shaft driven permanent magnet generator having rotating permanent magnets attached to the shaft and 3 phase stationary armature which feeds the main exciters field through 3-phase full wave phase controlled thyristor bridges. 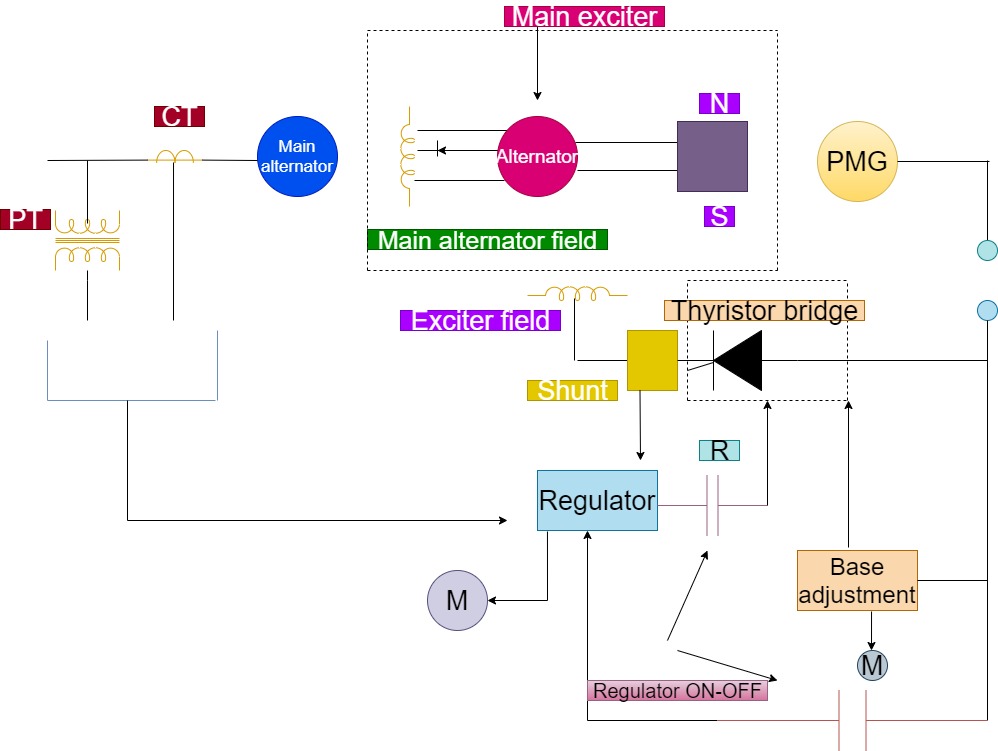 This system uses SCRs. The excitation supply is taken from the alternator itself through a 3-phase star/delta indoor type step down transformer and a rectifier system having mercury arc rectifiers or silicon controlled rectifiers.The star-connected primary is connected to the alternator bus,the delta-connected secondary supplies power to the rectifier system and delta connected tertiary feeds power to grid control circuits and other auxiliary equipment.The rectifiers are connected in parallel to give sufficient current carrying capacity. 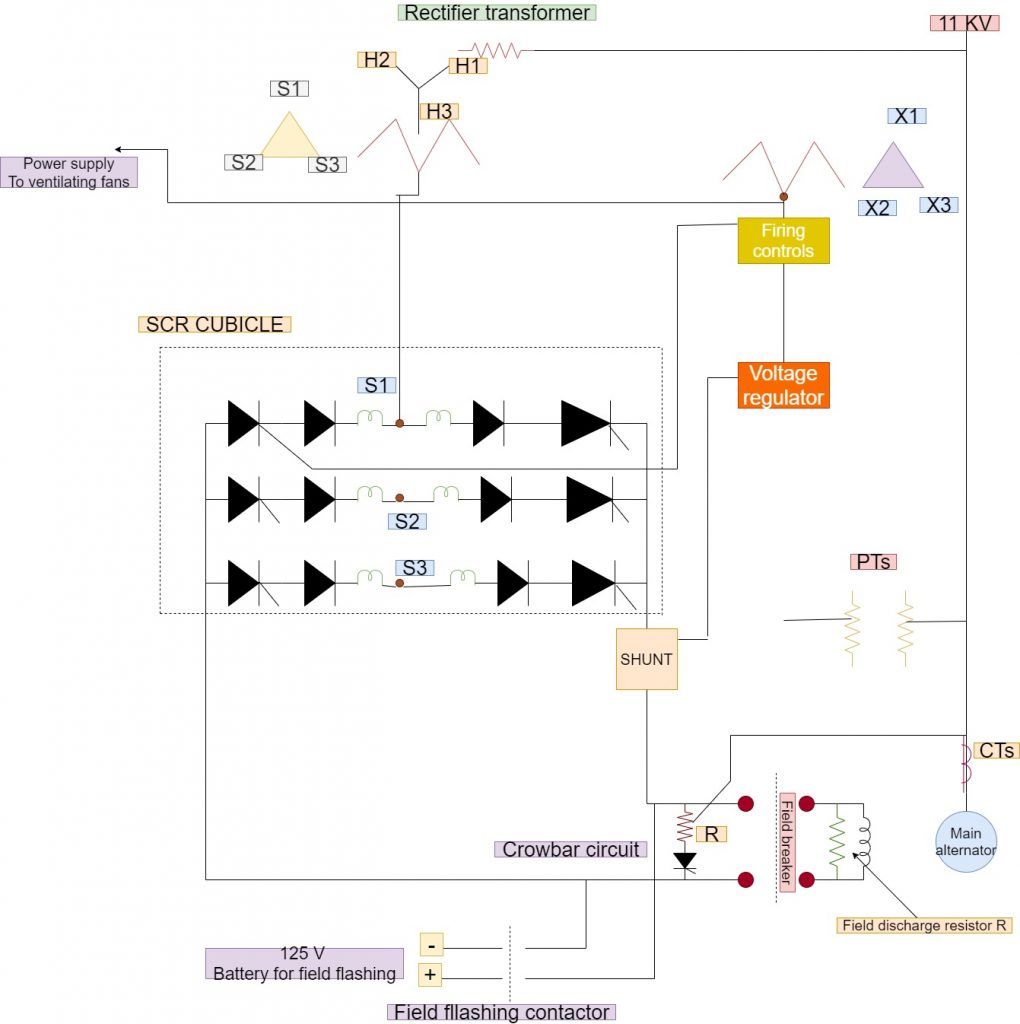