At the starting instant,a 3-phase induction motor acts as a poly phase Transformer having an air gap with a short-circuited secondary.If the motor of higher capacity(larger than 2 kW) is connected directly to the supply mains,it will draw heavy current(about 5-8 times the rated full-load current) at the starting instant which is offensive because it will cause large voltage drop in the distribution network and thus affect adversely the operation of other electrical equipment connected to the same distribution network.Hence,to control the starting current,use of starter is essential for starting of 3-phase induction motors of larger size(rating exceeding 2 kW).

Starter used for starting of a squirrel cage induction motor are:

This method involves the direct switching of poly phase squirrel cage induction motor to the supply mains.In this method of starting of cage motors the rate of temperature rises is high and the motor may get damaged if the starting period is large which may be due to

The starting period usually lasts a few seconds because starting torque for induction motor is about twice the full-load torque.

The above shown is the push button type direct-on-line starter which is very common in use.This type of starter is simple,inexpensive and easy to install and maintain.It consists of set of `start` and `stop` push buttons,a contractor(an electromagnet) with its associated contacts and usually an overload and under voltage protection devices.

The main contacts and the maintaining contacts gets opened when the supply fails or line voltage drops a certain value.When the supply gets return,the contractor cannot close until the start button is again closed. contractor is controlled by a three-wire control circuit which maintains the interruption of the circuit even after the supply is restored,this is the under voltage protection for the motor.

Overload protection is employed for protecting the motor and control apparatus from excessive heating due to overloads on motor.

A bimetallic strip is made of two different metals whose surface has been welded together.one of the metal expands rapidly as compared to the other,when heated.When heat is applied,the strip is caused to deflect or curl up due to unequal expansion of the two metals.When the motor current attains a predetermined value,the heat generated deflects the strip far enough to trip a latch that opens the motor control circuit.When the strips cools down sufficiently,the relay may be reset and the motor re-started.

In case of solder film type of overload relay the heat generated at a given overload current melts the film,which releases a latch arrangement and opens the motor control circuit.When the solder has cooled enough to hold the latch,the relay may be reset.

In case of thermal relay,the time required to operate is determined by the magnitude of current flowing in the heater.Thus ,the relay operates slowly for light overloads but disconnects the motor in a short time for dangerously heavy overloads. Relays in which the time of operation is inversely proportional to the amount of current flowing are known as the inverse time relays.

Torque Developed on Starting of Induction Motor By Direct switching 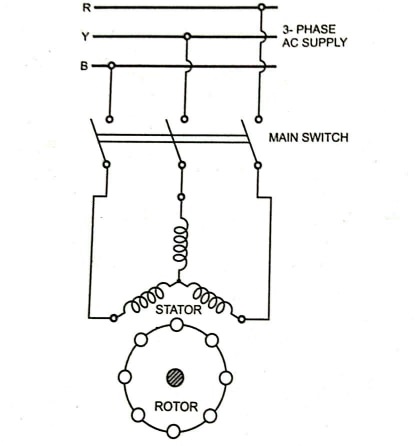 where I2 is the rotor current per phase,R2 is rotor resistance per phase,T is the torque developed,s is the slip and w is the supply angular velocity.

when the motor is connected directly across the supply mains,the starting current is equal to the short-circuit current,Isc.