An Electric generator is a machine that converts mechanical energy into electrical energy. It is based on the principle that whenever flux is cut by a conductor, an emf is induced which will cause a current to flow if ,the conductor circuit is closed. The direction of induced emf is given by Fleming`s right hand rule.

The essential components of generators are:

Dc generator and dc motors have the same general construction. Dc generator can be run as a dc motor and vice versa. All dc machine have five principal components:

Field system consists of a number of a salient pole bolted to the inside of circular frame(Yoke).Yoke is usually made of solid cast steel whereas the pole pieces are composed of stacked laminations. Filed coils are mounted on the poles and carry the dc exciting current. The field coils are connected in such a way that adjacent poles have opposite polarity.

Armature core is keyed to the machine shaft and rotates between the field poles. It consists of slotted soft-iron laminations (about 0.4 to 0.6 mm thick) that are stacked to form a cylindrical core. The laminations are individually coated with a thin insulating film so that they don’t come in electrical contact with each other. The purpose of laminating the core is to reduce the eddy current loss. The laminations are slotted to accommodate and provide mechanical security to the armature winding and to give shorter air gap for the flux to cross between the pole and the armature “teeth”. 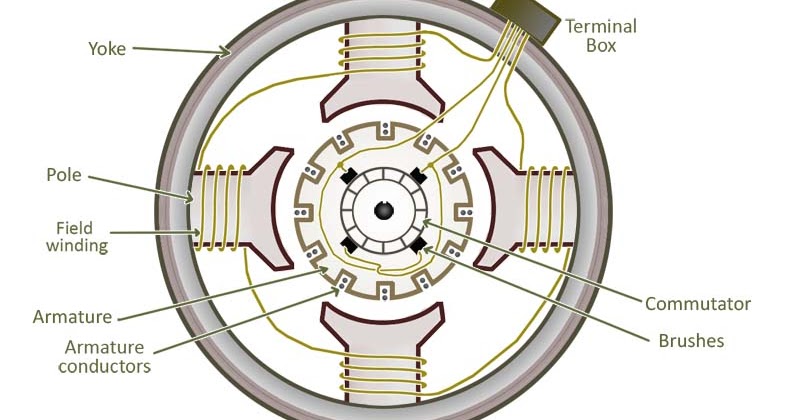 points to be noted for wave winding:

2.Simple lap winding: The armature coils are connected in series through commutator segments in such a way that the armature winding is divided into as many parallel paths as the number of poles of the machine. If there are Z conductors and P poles, then there will be P parallel paths, each containing Z/P conductors .Each parallel path will carry a current of Ia/P where Ia is the total armature current.

points to be noted for Lap winding:

Armature resistance depends upon the construction of the machine. Except for small machines, it has value less than 1Ω.