The product of voltage and current on the secondary side when the CT is supplying the instrument or relay with its maximum rated value of current is known as rated burden.Burden is measured in volt-amperes (VA).Generally the VA ratings ranges from 5 to 150 VA.The volt-ampere rating of CTs is low(5-150 VA) as compared with that of power transformers(a few KVA to several MVA). 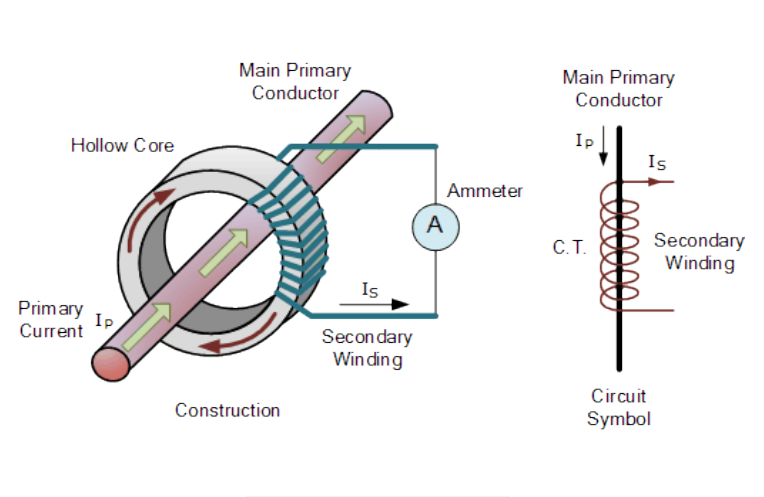 • By increasing the number of secondary windings, the secondary current can be made much smaller than the current in the primary circuit being measured.
• It should be noted however, that a current transformer rated as 100/5 is not the same as one rated as 20/1 or subdivisions of 100/5.
• This is because the ratio of 100/5 expresses the “input/output current rating” and not the actual ratio of the primary to the secondary currents.
• Also note that the number of turns and the current in the primary and secondary windings are related by an inverse proportion. 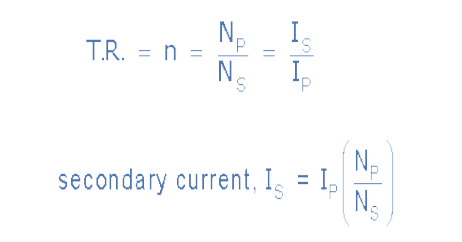 A bar-type current transformer which has 1 turn on its primary and 160 turns on its secondary is to be used with a standard range of ammeters that have an internal resistance of 0.2Ω’s. The ammeter is required to give a full scale deflection when the primary current is 800 Amps. Calculate the maximum secondary current and secondary voltage
across the ammeter.

Assume our current transformer from above is connected to a 480 volt three-phase power line.

This 76.8kV is why a current transformer should never be left open-circuited or operated with no-load attached
when the main primary current is flowing through it. If the ammeter is to be removed, a short-circuit should be
placed across the secondary terminals first to eliminate the risk of shock.

There are three basic types of current transformers: 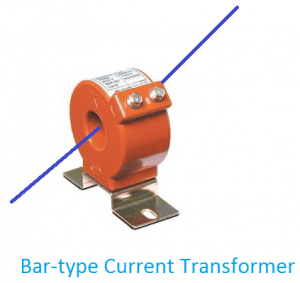 • This type of current transformer uses the actual cable or bus-bar of the main circuit as the primary winding, which is equivalent to a single turn.
• They are fully insulated from the high operating voltage of the system and are usually bolted to the current carrying device. 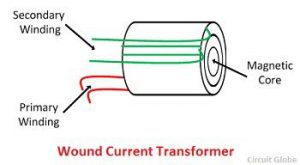 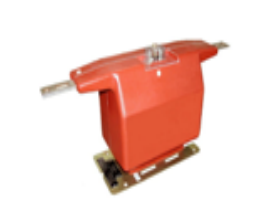 • Wound CTs have a primary and secondary winding like a normal transformer.
• The transformers primary winding is physically connected in series with the conductor that carries the measured current flowing in the circuit.
• The magnitude of the secondary current is dependent on the turns ratio of the transformer. 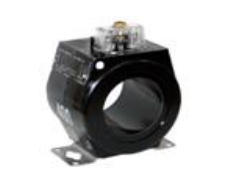 • They are constructed with no primary winding and are installed around the primary conductor.

• Window CTs can be of solid or split core construc-tion.

• Known as “clamp meters” also
• Clamp meters can measure current without disconnecting or opening the circuit.
• These are available for measuring currents from 100 up to 5000 amps, with sizes from 1′′ to over 12′′ (25-to-300mm).

• The most common CT secondary full-load current is 5 amps
• indicating devices, metering equipments, and protective relays are connected to CT secondary
• CT’s with a 1 amp full-load value and matching instruments with a 1 amp full-range value are also available.
• Many new protective relays are programmable for either value.
• The secondary current of 0.1 amp is also used in some cases for static relays.
• Primary current rating ranges from 10 amp to 3000 amp or more.
• CT ratios are expressed as a ratio of the rated primary current to the rated secondary current.

• This is the significance of saturation level of a CT core mainly used for protection purposes.
• The sinusoidal voltage of rated frequency applied to the secondary terminals of current transformer, with other winding being open circuited, which when increased by 10% cause the exiting current to increase 50%.
• The EMF induced in the CT secondarywindings is
E2 = 4.44φfT2

f is the system frequency,
φ is the maximum magnetic flux in Wb.
T2 is the number of turns of the secondary winding.
The flux in the core, is produced by excitation current Ie
. 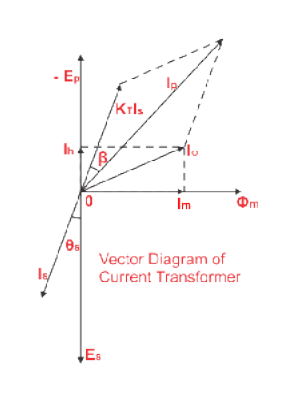 • Again from the equation above, it is found that, secondary voltage of a current transformer is directly proportional to flux φ. Hence one typical curve can be drawn from this relation between secondary voltage and excitation current as shown below.
• It is clear from the curve that, linear relation between V & Ie is maintained from point A & K. The point ′A′ is known as ′ankle point′ and point ′K′ is known as ′Knee Point′.

I0- Excitation current.
Im – Magnetizing component of I0

Iw- Core loss component of I0

Accuracy class is determined by the value of errors. There are two types of errors in a CT
(i) Current ratio error and
(ii) Phase angle error

• From above phasor diagram it is clear that primary current Ip is not exactly equal to the secondary current multiplied by turns ratio, i.e. KTIs

• For an ideal CT the angle between the primary and reversed secondary current vector is zero.

• But for an actual CT there is always a difference in phase between two due to the fact that primary current has to supply the component of the exiting current.
• The angle between the above two phases is termed as phase angle error in current transformer or CT.
• Here in the phasor diagram it is β. The phase angle error is usually expressed in minutes.

Limits of error for measuring CTs