In over headed transmission line,when an alternating potential difference is applied across two conductors,atmospheric air around the conductor is subjected to the electrostatic stresses.when there is low voltage ,there is no change in the condition of atmospheric air around the conductors.But,when the voltage is gradually increased ,a time arise when a faint luminous glow of violet colors appears together with a hissing sound, by the production of ozone which is detected by its odor.The glow is mainly due to the atmospheric air around the conductors  subjected to the electrostatic forces.In simple, when the voltage between conductors of an overhead line exceeded the disruptive critical voltage (minimum phase to neutral voltage at which corona occurs)value ,a hissing noise with a violet glow appears and all overall phenomenon is called corona.If we increase the potential difference the glow along with noise will increase in its intensity and air insulation breakdown takes place.(Note that the spacing between the conductor must be larger in comparison with their diameter to occur corona).If the spacing between the conductor is not very large as compared to the diameter then corona bridge the conductor and we may not be able to see the luminous glow.Mainly in EHV(extra high voltage ) and HVDC(High voltage ) line visible glow of corona is uniform.But in the case of HVDC the glow is brighter. corona loss increases in d.c system  in bad weather like in a.c system. 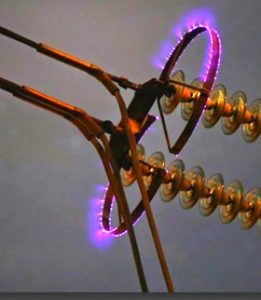 The effects of corona are as follows:

There are various factors affecting the corona:

Advantages and disadvantages of corona

The value of potential gradient at which complete disruption of air occurs is called the dielectric strength of air.

and g0 is the breakdown strength of air at a barometric pressure of 760 mm,and temperature of 25⁰C.

Visual critical voltage is defined as the minimum phase to neutral voltage at which glow appears all along the line conductors.Visual corona doesn’t occur when the electric filed intensity becomes equal to critical value rather it starts at higher value.

when the surface voltage gradient of line conductor exceeds the critical breakdown stress,corona apperas and energy is dissipated in the form of light and heat.This is known as corona power loss.

corona loss in an EHV AC line can vary between a few kw/km in fair weather to hundreds of kw/km during thunderstrom or bad weather condition.

power loss due to corona (Pc)under  fair weather condiotion is given by peek`s emperical formula.

r=radius of conductor in meter

D=GMD of conductor in meter

Peek`s formula is useful only when the corona losses are predominant and is less applicable when the losses are low.

peek`s formula is valid when

F is the factor that depends upon V/Vd.

Corona effects can be minimized in transmission line by using large diameter conductors which may be accomplished by using hollow conductors,ACSR(Aluminium conductor steel reinforced) or bundled conductors.Corona effect can also be reduced ,by increasing the spacing between the conductors.