Armature reaction is the effect of magnetic field set up by the armature current on the distribution of flux under the main poles of a dc machine either generator or motor.

For simplicity and convenience ,we consider an armature rotating in clockwise direction in the bipolar field.

when the field winding is energized and the generator is supplying no load,the brushes will make contact with the conductors lying in the magnetic neutral plane(MNP) which coincides with geometrical neutral plane(GNP).vector OA represents main mmf both in magnitude as well as in direction,producing the main field flux.currents flowing in the armature conductors creates a magnetizing effect which acts as at right angles to main field flux.Thus,this effect of magnetizing action of the armature currents is called cross-magnetization.

magnetic neutral plane:The plane through the axis,along which no emf is induced in the armature conductors. 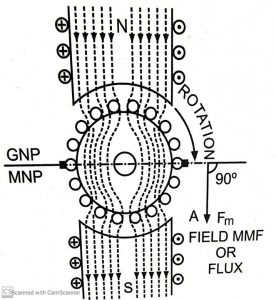 Fig:Distribution of Flux Due to Main poles when Generator is supplying No Load

When the field coils are not energized and generator is supplying load the direction of the current in armature conductors is same.The direction of current can be determined by applying Flemings right hand rule. Flemings right hand rule states that current in all the conductors under N-pole inward(shown by X) and outward in all the those conductors lying under s-pole(shown by .).Vector OB represents the mmf in both magnitude and direction i.e flux produces due to armature current carrying conductors will be perpendicular to the polar axis or parallel to the neutral axis.cross-magnetization is present only when armature current is flowing and the amount of cross-magentization so produced is proportional to the amount of current flowing through the armature conductors. 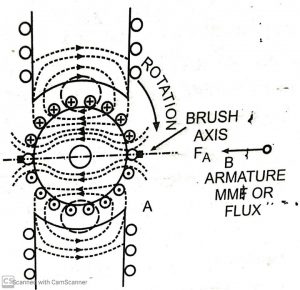 Fig:Distribution of Flux Due to Armature current carrying conductors while Field coils carrying No current

When the generator is supplying the load,the main mmf is downward represented by vector OA and mmf produced due to armature current is from right to left represented by vector OB.The resultant mmf is OC. The magnetic neutral plane which is always perpendicular to the resultant mmf OC will be shifted round in the direction of rotation.The magnitude of shift depends upon the length of the vector OB and also on magnitude of the armature current. 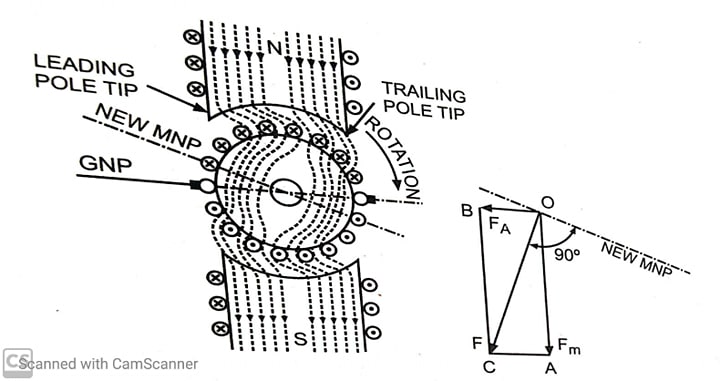 Fig:Distribution of Resultant Flux Established From simultaneous Action of Field and Armature current 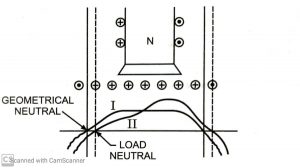 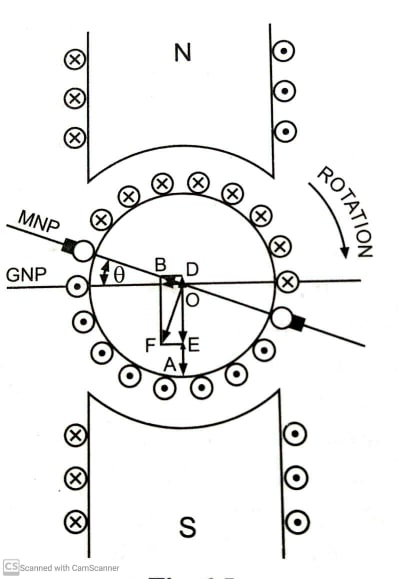 The shift of the magnetic neutral plane in the direction of rotation affects the commutation.The brushes must be shifted back and forth as the load changes because the effect of the armature reaction depends upon the value of the armature current. 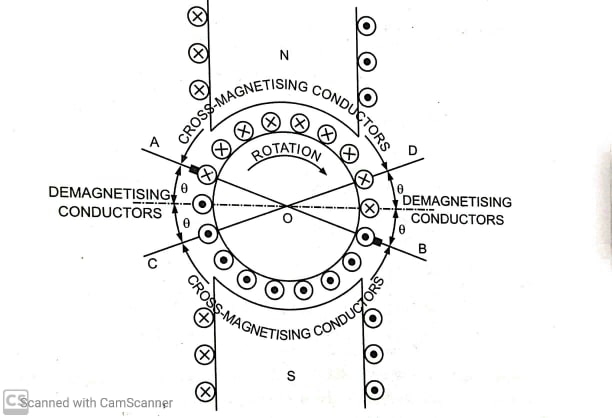 Angle of lead of brush from gnp=θ*in mechanical degrees